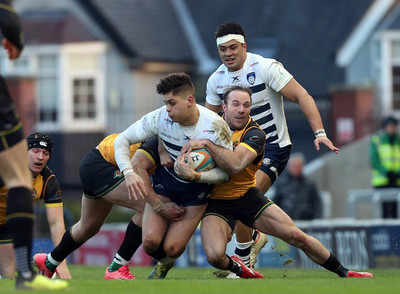 Ben Ward’s men faced a 7-0 deficit at half time but responded with four unanswered tries to run away with a crucial win to remain second in the Greene King IPA Championship.

An uneventful first half in blustery conditions saw both sides trying to adapt, and as a result a number of handling errors saw very few chances created. The hosts went in front on the half hour mark as a counter attack gave them plenty of space in the midfield to score the first points of the afternoon.

A loose kick landed in the hands of Jacob Umaga who stepped through three defenders and offloaded to Jade Te Rure, which allowed the fly-half to slide over the line under the posts. Umaga converted to give his side a 7-0 advantage as the clock ticked towards the break.

That seemed to spark the Trailfinders in to life and James Cordy Redden went within inches of scoring a spectacular try with five minutes remaining of the first half. A number of offloads gave the winger a route to the line from just outside the 22, but he was held up over the line and the hosts survived.

From the resulting scrum a number of penalties followed but that platform couldn’t provide a scoring moment and Carnegie went in at the break with a seven point lead.

The West Londoners were at their clincal best in the second half and brought themselves level after just three minutes as they grew in confidence.

Peter Lydon broke through two defenders and passed inside to Lewis Jones who still had plenty of work to do but used his footwork to race through from 35 metres to get the Green and Whites’ first points of the match. Lydon converted to bring his side level with just over half an hour remaining.

Lydon then edged the Trailfinders in front on the hour mark with a penalty from 40 metres, and they didn’t look back from there as three tries in the final quarter gave them a memorable win.

Jordan Burns scored a trademark try with 15 minutes left to give the visitors some much needed breathing space. From the top of a lineout the ball was spun to Jordy Reid who smashed his way past the defence before releasing Burns who ran diagonally across the pitch to sneak over in the corner. Lydon converted from the touchline to extend the advantage to 10 points.

James Cordy Redden then put the result beyond doubt with five minutes left to put the Trailfinders further in front. Sustained pressure deep in the 22 saw them creeping further towards the line, and an inside ball presented the winger with the opportunity to bundle over from just five metres out. The conversion went narrowly wide, but the visitors now had just three minutes to chase the all important try bonus point.

It arrived in dramatic fashion with the final play of the game to send the vocal visiting supporters in to raptures. Another break from Jones and then Burns brought them up to the line, and an offload saw Will Harries dive over from close range to get the bonus point. Lydon added the conversion to confirm a highly impressive 29-7 victory.

Ward’s side now head in to next Saturday’s Championship Cup Quarter Final at Trailfinders Sports Club with growing confidence after a crucial win at Headingley.