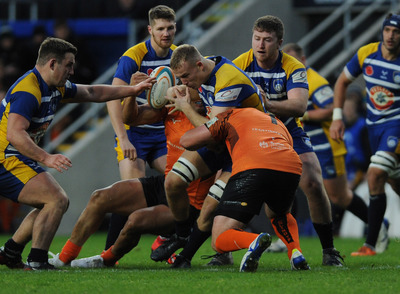 Ealing Trailfinders stormed their way to a comprehensive 66-13 victory over Yorkshire Carnegie at Emerald Headingley Stadium in their most complete performance of the season so far.

Ben Ward’s side scored 10 tries in total including a late blitz of four in the final 10 minutes to get back to winning ways in emphatic style.

The Trailfinders went in front after just six minutes with a try from Kieran Murphy to set the tone for the afternoon. A penalty was kicked to the corner and then after going through the phases patiently, the ball found it’s way to the back-rower who powered over the line from close range. Craig Willis kicked the first of his seven conversions to give his side a 7-0 lead.

That lead then doubled with only 11 minutes on the clock as it looked like the visitors would run away with it. Eljiah Niko, who was making his first start for the club powered past four defenders to break the line, and then he had Nathan Fowles alongside who had a clear run to the line from just outside the 22.

Carnegie then rallied and responded straight away to get themselves back in to the match. Ryan Shaw kicked a penalty to open their account, and just a minute later he intercepted Lewis Jones’ pass to run under the posts and score. He converted his try, cutting the lead to just four points.

The West Londoners then went in search of the try bonus-point and scored twice before the break to wrestle back control of the game. A five metre scrum gave them an ideal attacking position, and the ball was spun wide to David Johnston who dived over in the corner.

Harry Sloan was then sent to the sin-bin for a dangerous tackle, but his team refused to let it affect them and Andrew Durutalo broke away from a rolling maul in the final play of the half to cross for try number four. The conversion went wide, but the Trailfinders went down the tunnel with a 24-13 lead.

The second half was as dominant as Ward’s men have looked all season and they scored 42 unanswered points to cruise to victory.

Reon Joseph scored a comical try to keep the scoreboard building just before the 50 minute mark. Craig Willis grubbered ahead, and the ball cannoned back off the post in to Joseph’s hands to dot the ball down.

The bench was then emptied and they had a monumental impact as the Trailfinders kicked on in impressive style. Alun Walker picked up from the base of a ruck and dummied to fool the defence, allowing him to run straight through to the line for try number six.

The scrum then started to get significant dominance in the final quarter, and they were rewarded with a penalty try after 70 minutes after it powered over from just five metres out.

Oli Robinson then marked his league debut with a try to bring up the half century of points. Ben West put huge pressure on the clearance and charged it down, with the ball bouncing up to the back-rower who pounced on it and scored.

There were just five minutes remaining but the Trailfinders still found time for two tries to round off the victory. Reon Joseph got his second after racing down the wing from 30 metres in trademark style, and Harry Sloan was then the beneficiary of Jordy Reid’s break as the Australian drew in the final defender to allow the centre a clear run to the line.

Willis’ conversion then marked the end of the match, and confirmed a hugely impressive victory for the Green and Whites who will head to Castle Park next week with a spring in their step.