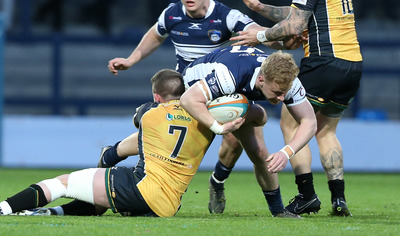 Ealing Trailfinders rescued a last gasp draw in dramatic circumstances as a late try from Reon Joseph ensured that they would leave Headingley with the final score score level at 23-23.

Yorkshire Carnegie held a 23-16 lead with just two minutes left on the clock but debutant Joseph made his mark on the first team in impressive style with an outstanding individual score, and Peter Lydon’s touchline conversion secured two points for Ben Ward’s men.

Reon Joseph got the West Londoners and his debut off to the perfect start with a try after just three minutes. A number of penalties took them up towards the try-line, and the ball was then spun wide for the winger to dot down with his first touch of the ball in memorable fashion. Lydon’s conversion extended the early advantage to 7-0.

The full-back, who had his kicking boots on kicked two identical penalties from the half way line to give his side a 13-0 lead, and despite another attempt coming back off the posts it was clear that the Trailfinders were dominating the early exchanges.

The hosts then began to come back in to the match with a try from Tom Bullough on the 20 minute mark. From the top of a lineout the ball went straight to the centre, who ran clean through the defence to score under the posts. Stevie McColl’s conversion cut the deficit to six points.

Richard Beck was sent to the sin bin for Yorkshire after repeated infringements at the breakdown, but that didn’t seem to trouble them as a McColl penalty brought them to within three points of the Trailfinders.

Lydon then edged the Trailfinders further ahead with another penalty, but Yorkshire responded ahead of the break to go in front before half time. Another McColl dissected the posts, and then from a rolling maul Mike Mayhew drove over the line to put the hosts 20-16 in front at half time.

A couple of early chances came the way of the Londoners in the first 10 minutes of the second half, but another kick from McColl put Yorkshire seven points in front.

The hosts then threatened to pull away and had a lot of success at scrum time. A five metre scrum saw them awarded three consecutive penalties, but then just as they were to dot the ball down in went forward and all of the Green and Whites breathed a large sigh of relief.

That seemed to galvanise the squad and with the replacements adding further impact, chances to draw level began to arrive.

Rhys Lawrence, who led the side heroically as captain ripped the ball and then raced away before releasing Calum Waters, but his kick ahead wasn’t gathered and the opportunity was missed.

With just two minutes let it looked as if Ward’s side would have to settle for a losing bonus point, but a moment to remember from debutant Joseph saved the day. He gathered the ball outside the 22 and stepped a number of defenders before diving over the line to bring his side within two points.

Lydon kept his composure with the conversion from the touchline to level the score, and despite late chances for both sides the referee ended the match as they both settled for two points and gave the Trailfinders a spring in their step ahead of this weekend’s British and Irish Cup Semi Final.