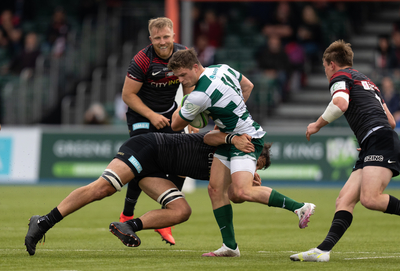 Saracens secured promotion back to the Gallagher Premiership with a consecutive triumph over Ealing Trailfinders to lift the Greene King IPA Championship trophy, winning 57-17 on the day.

The defeat condemns Ben Ward’s side to another season in the second tier, but their showing particularly in the opening period was one of encouragement and improvement from the first leg.

The teams went in level at the break with ten points apiece, with Sarries’ unchanged side unable to match their performance at Vallis Way last time out.

A second half onslaught put the distance between the sides as Sarries touched down with eight tries and ultimately secured promotion in front of over 2,000 fans at the StoneX Stadium.

Trailfinders made up for lost time by immediately putting seven points on the board, as Saracens flanker Jackson Wray was penalised and sent to the bin for deliberately knocking the ball out of touch following a miscued collection of Craig Willis’ kick-off.

Owen Farrell registered his first three points of the afternoon having initially possessing the advantage awarded by referee Luke Pearce, where an overcooked ball bypassed Sean Maitland made its way in to touch as the Sarries captain opted to split the posts.

The defensive output from Ben Ward’s side in the opening fifteen minutes saw a marked improvement to that of the first leg at Vallis Way, with hard work at the breakdown exemplified with a reward to take a chance at goal that Willis could not convert.

The men in Green and White were punished for not making their territory count as hopes of a second try were dashed when Shaun Malton’s lineout was nabbed, setting in motion the beginning of a mighty Sarries push beyond their five-metre line and towards their ’22.

Craig Willis made no mistake with his second kick of the afternoon to extend the lead back to seven for Trailfinders with 25 minutes gone, ensuring that the hosts’ relative lack of clinical edge was represented in the scoreboard.

Mako Vunipola spearheaded a Sarries maul over the whitewash to conclude his side’s procession up the pitch soon after nevertheless, with Farrell’s following conversion levelling the scores between the sides five minutes before the break.

Saracens couldn’t cash in on their momentum before the interval as a vital turnover at the ruck from Guy Thompson halted Mark McCall’s men in their tracks, where a phase before a try looked ominous as Sean Maitland ghosted through Trailfinders’ defence as first receiver from a lineout.

The scores did not stay level for long as Alex Lewington evaded two tackles before offloading to Elliot Daly to cross over, taking the lead for the first time in the game.

Sarries begun to turn on the style and show why they are a Premiership calibre outfit, outdoing a fast-becoming brittle Trailfinders resistance.

Centurion Vincent Koch doubled his side’s lead on his 100th appearance in black and red, touching down after picking up off the ruck.

The departing Michael Rhodes’ farewell game at StoneX Stadium came to a premature end as the back-rower saw red following a harsh tackle on David Johnston.

Just as the rolling maul had often been the order of the day in the first leg, Jamie George continued the trend by finishing off his own lineout; charging towards the whitewash despite being a forward down following Rhodes’ dismissal.

It was all change for with 50 minutes gone as a healthy portion of Sarries’ international contingent, including the likes of Itoje and Farrell, vacated the pitch with their trip to South Africa with the Lions this July in mind.

One of the remaining internationals on the pitch Nick Tompkins extended the lead, with the Welshman one of many Saracens men flooding the right wing to score.

Rayn Smid’s agonising knock-on before grounding denied Ealing’s first try from play in the game, with the South African having shadowed a penetrating Craig Hampson to the try line.

Several phases of rich line-breaking rugby eventually saw the ball being worked out to former London Irish winger Alex Lewington, who jinked and dummied his way into a gap in the converging Trailfinders defensive line, with substitute Manu Vunipola adding the extras.

Front row replacement Lewis Thiede was the second sin binning of the afternoon for his role in a botched scrum, with the resulting reset again once again not legally contested by Trailfinders as a penalty try extended the deficit to forty points with ten minutes to go.

Ralph Adams-Hale’s impressive burst down a desolate right flank and into Trailfinders’ saw the ball passed out to Alex Lewington, who was this time denied before the line by a Bill Johnston tackle.

Lewington was able to offload from the floor to his teammate Tom Whitely, who acrobatically touched down on his final appearance for Sarries.

Substitute Jordan Burns left a mark on the fixture with a consolation try in the corner as the final positive action of the season for Trailfinders, who were ultimately undone by the might of a Premiership level side.