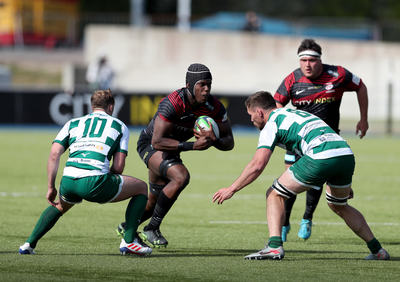 Ealing Trailfinders suffered their first defeat of the Greene King IPA Championship season on Sunday, as they fell to a 48-20 defeat to Saracens at the StoneX Stadium.

Trailfinders were right in the mix with Saracens at half time thanks to a penalty try late in the half, as well as the trusty boot of Craig Willis, and the hosts took a 23-13 lead into the interval.

Saracens’ class showed in the second half however, when they capitalised on some uncustomary profligacy from Ealing and ended up scoring three tries and wrapping up a 48-20 victory, as they close the gap on Trailfinders at the top of the table.

Ealing exerted some early pressure on Saracens at the scrum, earning themselves two penalties at the set-piece, although it was Saracens who struck first, initially through the boot of Owen Farrell, before wing Alex Lewington finished a sweeping move on the right wing.

Willis and Farrell traded penalties as the half went on before Vincent Koch powered his way over as Saracens kept pounding on the door and eventually Ealing’s defence buckled.

Ealing’s well-functioning set-piece brought them some joy as the half wound down, however, with Saracens unable to legally stop a driving maul from 10m out and the referee awarded a penalty try and a yellow card to Jackson Wray.

Trailfinders were unable to punish Saracens’ numerical disadvantage, though, as errors saw Farrell successfully kick three penalties in the 10 minutes that Wray was off the pitch.

Koch once again crossed the whitewash from close range in the second half, before Aled Davies scooted over in support of a good break from Sean Maitland, two scores which realistically took the game beyond Ealing.

Despite having winger James Cordy Redden in the sin-bin, a Guy Thompson turnover and length of the pitch counter attack saw Ealing earn themselves a 5m scrum, which Shane Buckley capitalised on and registered Ealing’s second try of the game during the subsequent phase play.

Lewis Thiede then joined Cordy Redden in the sin-bin and, with Ealing down to 13 men, Saracens put the finishing touch on a comprehensive victory as Nick Tompkins went over the line and completed an impressive showing from the north Londoners.