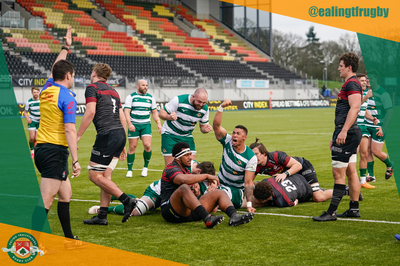 Ben Ward’s side scored five tries en route to one of the best results in the club’s history as they left North London with a win that showed the remarkable progression that the team has made this year.

The win means that if the Green and Whites beat Doncaster Knights in a fortnight they will lift the inaugural Trailfinders Challenge Cup.

Saracens got off to the perfect start and took the lead with just four minutes on the clock. A box kick caused the Trailfinders back-line huge problems, and popped up in to the hands of the centre who had a clear run to the line. Tom Whiteley’s conversion gave the hosts a 7-0 lead.

The Green and Whites then started to grow in to the game and went within inches of opening their account. Dave Johnston broke down-field and then Kyle Whyte carried up to the line but was turned over in the act of scoring. From the following phase a penalty was awarded, and Craig Willis cut the deficit to four points courtesy of his right boot.

Then almost straight from the restart Morris scored his second as Saracens extended their lead. Once again a high box kick was proving difficult to gather, and the ball was spun to him to dive in the corner. The conversion was wide, but they now had a 12-3 advantage.

From then on the Trailfinders dominated the rest of the first half and were well worthy of their lead at the break.

Luke Daniels gathered a cross-field kick and from the next phase Craig Hampson tried to snipe down the short side, but was dragged in to touch.

The pressure was building, and it paid off just before the 30 minute mark as Rayn Smid powered over the line. Pat Howard’s thunderous carry took play within five metres, and the skipper then carried from the base of the ruck and was never going to be stopped from such close range. Willis’ conversion cut the lead to just two points.

Ward’s men then went in front before half time as Will Davis scored for the second week in a row. A penalty was kicked to the corner and the Trailfinders stayed patient by going from side to side, before the prop carried and bundled over in the corner. The conversion went wide, but the Green and Whites now had a 15-12 lead.

Willis had the chance to extend the advantage on the stroke of half time from the tee, but the wind dragged the kick wide and the teams went down the tunnel after a ferocious 40 minutes at StoneX Stadium.

Saracens came out firing in the early stages of the second half and took back the ascendancy of the match. Whiteley missed a penalty almost immediately after the restart, but then from the 22 drop out Rotimi Segun scored a long-range try as they went in front. A break in the wide channels allowed them to draw in the final defender, and then released the winger who sprinted clear. The conversion put the hosts 19-15 ahead.

Dean Hammond then scored a sensational individual try as the Trailfinders went ahead again. From a scrum on half way Craig Hampson spun it to the South African who had four defenders in front of him, and somehow stepped his way through them before putting on the afterburners and sprinting clear to spark wild celebrations on the bench. Willis then converted the try as the visitors went 22-19 in front.

It got even better for the Trailfinders with 15 minutes remaining as they scored their bonus point try. Saracens had a scrum on their own line but the visitors were awarded a penalty. They took it quickly and Pat Howard’s physical carry was too much for the defence as he smashed his way to the line. Willis again added the extras as the lead was extended to 10 points.

More pressure followed and Willis was given another opportunity from the tee, which he made no mistake with as the lead went up to 32-19.

Guy Thompson rounded off the scoring for the visitors as they turned it in to an emphatic victory. The trusted rolling maul was motoring towards the line, and the flanker was at the base to dot down for try number five. Willis’ touchline conversion put his side 20 points ahead.

Kapeli Pifeleti got a consolation try for the hosts as they went over in the final minute to secure a try bonus point, but the day belonged to the Trailfinders who registered a remarkable win to take control of the Trailfinders Challenge Cup.