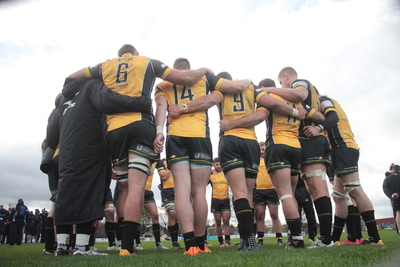 Ealing Trailfinders continued their 100% start to the British and Irish Cup with a 45-10 bonus point victory over Rotherham Titans at Clifton Lane.

After a tight first half the teams went down the tunnel with the score level at 10-10, but the West Londoners looked a completely different side in the second half and registered 35 unanswered points to take control of the match and leave with a deserved win.

It was the Titans who started strongly and went in front with a try from Drew Cheshire after just five minutes. After a number of phases in the 22, the ball was spun wide to the centre who used his feet to step the final defender and open the scoring. Lee Millar’s conversion put Andy Key’s men 7-0 in front.

The Trailfinders were quick to respond and got their first try of the afternoon on the 15 minute mark. Rory Clegg’s inch-perfect cross-field kick was gathered by Will Harries, who drew in the full-back and then passed inside to Luke Daniels who had the pace to run in unattended to cut the deficit to just two points.

Ben Ward’s side then went in front five minutes later with top try-scorer Alun Walker adding another five-pointer to his tally from close range. A rolling maul was dragged down but when the ball was recycled it allowed the Scot to bundle his way over from just a metre out and put his team 10-7 in front.

The remainder of the first half was a cagey affair with both sides making a number of handling errors in the freezing cold conditions, however with the last play of the half a penalty from Millar meant that Rotherham drew level and headed in to the changing rooms with 10-10 on the score board.

A ruthless Ealing side emerged for the second half and produced a dominant display to secure the victory in emphatic style with a mightily impressive 40 minute performance.

Lewis Jones marked his return to the starting line-up just two minutes in to the second half to put the Trailfinders back in front. From the base of a scrum the ball was hit the centre who was right on the gain-line, and he was able to power his way to the line to dive under the posts. Luke Daniels, who converted all five second half tries extended the lead to 17-10.

Just four minutes later the try bonus point was secured and the daylight between the teams increased with a try from Harry Casson. Clegg took a quick-tap penalty inside the Rotherham 22, and after being hauled down just short the captain was able to drive over from close range to ensure that his team left with the extra point.

The intensity stayed high throughout the second half and Grayson Hart was next to go over the line just before the hour mark. A five metre lineout found it’s way to the scrum-half, who dummied and went through the middle of two defenders to score. Daniels’ conversion put Ealing 31-10 ahead, which put the result beyond doubt.

Lewis Robling then joined in the try-scoring with another first-phase try from a set-piece. The ball came off the top of a lineout and was zipped straight to the inside centre who went through four defenders on his 20 metre run to the line to add further gloss to the score-line.

The scoring was rounded off by Lewis Jones who got his second of the match with 10 minutes left on the clock. Piers O’Conor tidied up a fumble in a Rotherham attack and raced straight away before popping the ball up to Daniels. The Titans defence hauled the South African down but he was able to offload to Seb Stegmann, who eventually found Jones to run to the line and extend the lead to 45-10.

The final 10 minutes saw both sides playing open rugby as they went in search of further points but the defences held firm and rounded off what had been a fierce battle at Clifton Lane.

The result means the Trailfinders sit top of the pool with a maximum 15 points from 15 as they continue to chase a home quarter-final, and they welcome Rotherham to Vallis Way next Saturday for the return fixture where they will be aiming to continue their momentum in front of the home supporters.