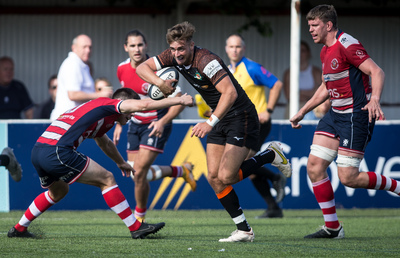 Harry Dugmore scored a hat-trick and Jack Metcalf crossed for two tries as Ealing Trailfinders ran out 26-57 winners over Rosslyn Park at The Rock.

On a sunny afternoon in South West London, Ben Ward’s squad opened the scoring in the eighth minute. Match-day captain Craig Willis threw a slick pass to fullback Jack Metcalf who sliced through the Park defence to score. Willis added the conversion and Ealing took the early lead.

Six minutes later and Willis was again involved in the build-up. Punching a powerful kick deep into Park territory, the home side scrambled possession and booted the ball back into touch. From the lineout the Ealing pack shifted into top gear, driving powerfully over the line. Dugmore the scorer, converted by Willis.

With the clock ticking toward the 20 minute mark, Ealing again built attacking momentum deep in Park territory. Phase by phase Trailfinders worked the ball neatly forward, providing Dugmore with the perfect platform to barge his way over from close range. Willis converted to extend the lead to 0-21.

Ealing responded quickly, taking full advantage of a dominant driving maul to hammer over the line for their fourth try. Hooker Jan-Henning Campher scoring at the back of the maul to extend the lead to 5-26.

With the game turning into a sea-soaring battle, the home side found space in Ealing’s line, breaking free to score their second in the 28th minute. A neat offload saw the Park player run unchallenged to the line. Conversion successful.

With the score at 12-26, Park then found themselves down to 14 players. Former Trailfinder Arthur Ellis was sent to the bin following a ruck infringement and Ealing took full advantage. Number 8 David Douglas Bridge charging down the far wing to score his first try in Ealing colours. Willis converted to return the lead to 21 points at half-time.

The second half kicked-off with Ealing picking up where they left off. Hard-working prop Jimmy Roots bulldozed his way over the line from five metres, converted by Willis to extend the score to 12-40.

Two minutes later and the visitors scored once more. Flanker Will Montgomery rampaging through the Park defence, beating the last defender to crash over from 35 metres. Willis added the two points and Ealing led by 35.

Both sides then found themselves down to 14 players. A mid-field scuffle between Dugmore and his opposing player resulted in the referee showing yellow to both offenders. Park were awarded the penalty and took full advantage. Crashing over from the lineout, the referee penalised Ealing once again and awarded the penalty try. As result James Gibbons was yellow carded and Ealing were reduced to 13 men.

Despite the setback, Trailfinders continued to fight their way into excellent scoring position. Spinning the ball wide to the lively Metcalf, who with beautiful footwork beat his marked opponent to break through and score his second of the afternoon.

Park responded five minutes later, crossing for their fourth try to reduce the score to 26-52, however Ealing had the last laugh. Dugmore returning to the pitch, dotting down at the back of the powerful Ealing maul to secure his hat-trick and complete the 26-57 victory.

Ealing Trailfinders' next preseason fixture is this Friday 26th August against Richmond at the Athletic Ground.