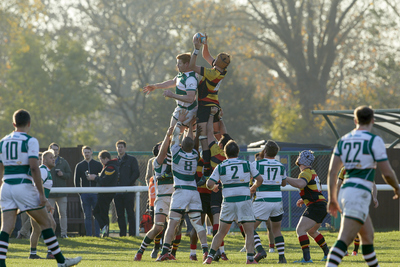 Ealing Trailfinders got back to winning ways as they secured a hard fought 33-7 victory over Richmond to register their first win of the Championship Cup campaign.

At a blustery Athletic Ground points were always going to be at a premium but tries from Alun Walker, Laurence May, Jordan Els, Jordan Burns and Will Harries ensured that the Trailfinders left with a much-needed bonus point win.

Alun Walker got the Trailfinders off to the perfect start, scoring the first try of the match after just five minutes. A penalty allowed Laurence May to kick to the corner, and in trademark style the hooker broke away from the rolling maul to dot the ball down. May converted to give his side an early 7-0 advantage.

Richmond responded straight away however, with a try from Ronnie McLean to level the score. Three penalties in a row saw them kick right up to the line, and they went through the hands deep in the 22 with an overlap on the right wing which allowed McLean to score in the corner. Ben Cook’s touchline conversion made it 7-7 after just 10 minutes.

Ben Ward’s side then saw a number of opportunities pass them by as they went in search of the next score. Richmond managed to bring down a rolling maul as it appeared to be heading towards the line, and from the following phase Howard Packman went over but was held up as the frustration began to grow.

Neither side managed to get the breakthrough in the remainder of the first half as handling errors cost them, and with a late penalty from Cook going wide it saw the two teams go down the tunnel level on the score board in a low-scoring opening 40 minutes.

The Trailfinders again made a positive start after the break, taking the lead on the 45 minute mark to the relief of their supporters. A lineout deep in the Richmond 22 was gathered by Harry Casson, and after going through the phases a miss pass from Ryan Foley allowed Laurence May to stroll to the line unattended. The fly-half converted his own try to extend the lead to seven points.

Craig Willis then took a flat pass just five metres from the Richmond try line but in the process of being carried over the line by the supporting attackers a knock on saw the hosts escape.

The West Londoners then rallied in the final quarter to run away with the lead after a spell of three tries in 10 minutes.

Jordan Els marked his debut with a try with just over 10 minutes remaining as the visitors took control of the match. A penalty was kicked to the corner and once more the rolling maul rumbled over the line to see Els dive over. The conversion went narrowly wide, but the Trailfinders now had a crucial 12 point lead.

That lead was extended just three minutes later to secure the bonus point, thanks to an outstanding individual try from Jordan Burns. The scrum-half gathered the ball from the base of a ruck and dummied before racing away from 35 metres to dive under the posts and put the result beyond doubt. May added the extras to give his side a further cushion of 19 points.

There was still time for Will Harries to mark his first appearance of the season with a try in the final five minutes. Another maul went up to the line, and the ball was popped up to the Welshman who stepped his way over from close range. May again added the extras as the Trailfinders went past the 30 point mark.

Ben Ward’s men then closed out the match in the final three minutes to secure an impressive win over their local rivals, much to the delight of the visiting fans.