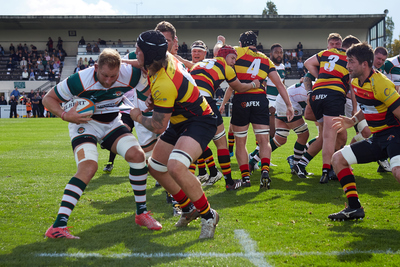 Ealing Trailfinders maintained their impressive start to the season with a 33-26 bonus point victory over Richmond at the Athletic Ground.

In what was a tense affair Ben Ward’s side secured the win but in similar fashion to last weekend they will feel like they made hard work of it and will want to improve before welcoming Bedford Blues to Vallis Way next Saturday.

Tries from Alun Walker, James Cordy Redden, Grayson Hart and Andrew Durutalo made sure that the West Londoners headed back over Kew Bridge with five points.

Rob Kirby and Peter Lydon traded early penalties to have the score level at 3-3 after 10 minutes, but further ill-discipline from the visitors gave Kirby another chance and he successfully put his side 6-3 ahead.

Ben Ward’s men then started to play with more purpose, and went ahead on the 20 minute mark with a try from Alun Walker. A five metre lineout gave them the perfect attacking opportunity, and with the maul driving towards the line, the hooker broke away to dive over the line in the corner. Lydon’s touchline conversion gave Ealing a 10-6 advantage.

It got better for the visitors five minutes later with a brilliant try from James Cordy Redden. Piers O’Connor made a great break through the middle, and the ball was then recycled just outside the Richmond 22. Andrew Durutalo took the ball up to the last defender and audaciously offloaded to Redden who was on the wing to race clear from 10 metres. The conversion went just wide, but the lead was extended to nine points.

Ealing were playing most of the attacking rugby and looked to take control of the match, but were left frustrated by some handling errors and were also penalised for crossing on two occasions.

That lead was cut to six with Kirby’s third penalty, before it was wiped out all together just before half time with a Richmond try. The home side had a number of phases on the try-line as they looked to go over, and spun the ball wide for Jordan Simpson-Hefft to run in the corner unattended.

The touchline conversion meant that Steve Hill’s team headed down the tunnel with a 16-15 lead at the break.

Ealing came out firing in the second half, and Grayson Hart put the visitors ahead after 47 minutes with a trademark scrum-half try. After peppering away at the try-line, Hart found a gap in the defence and dummied to dive over from close range.

Jono Woodward was sent to the sin-bin for Richmond after taking over Glen Townson in the air, and Ealing capitalised by securing the bonus point try.

A penalty meant that the Trailfinders had a five metre lineout, and despite being pulled down before the line it was popped up to Durutalo who used his power to smash his way over the defence and to the try-line. With Lydon’s conversion the lead was 27-16, but Richmond came back and refused to lie down.

They were awarded a penalty try on the hour mark to get themselves back in to the match. After breaking away from a scrum, Hart tackled his man with no arms which sent the referee under the posts, and also sent him to the sin-bin.

Lydon then edged Ealing seven points in front with his second penalty, but again the hosts came back firing.

They were inches away from scoring in the corner with seven minutes remaining, however a brilliant last ditch tackle meant that a foot was in touch.

Djustice Sears Duru then secured a much needed turnover with three minutes left when Richmond were pressing again. With one minute left on the clock a huge scrum from the forwards saw them awarded a penalty, and Lydon smashed it over the posts from the half-way line to put the result beyond doubt.

There was still time for a Rob Kirby penalty to ensure that Richmond secured a losing bonus point, but it was Ealing who left the Athletic Ground with a hard-fought 26-33 win.