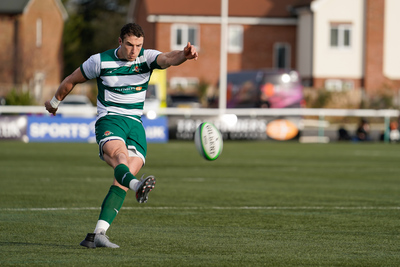 Ealing Trailfinders finished their pre-season campaign with a 33-24 victory over Richmond in a lively local derby at the Athletic Ground.

The Green and Whites stormed their way in to a 28-5 lead heading in to the final quarter as they dominated for large stages, but a late rally from Richmond made for a dramatic ending between the two old rivals.

Simon Uzokwe crossed for two tries, as well as Jordan Burns and Abongile Nonkontwana and a penalty try for Ben Ward’s men.

On a day that will be remembered fondly for the club, 10 Trailfinders Rugby Academy players featured to show the significant pathway that the programme is providing for players.

The Trailfinders looked to start on the front foot with some expansive play in the opening stages, and went close to opening the scoring with eight minutes on the clock. A lineout inside the 22 then saw Steven Shingler carry right up to the line, and from the following phase Simon Uzokwe went over but he was held up and the defence held firm.

Despite the visitors enjoying the majority of the early possession, it was Richmond who struck first with a try from Alex Goble. A break in the midfield gave them an overlap on the right, and the winger found himself in plenty of space with 30 metres ahead of him as he stepped all the way to the line. Jordan Burns’ cover tackle forced him to dive acrobatically, but he got it down in time to give them a five point lead.

The Trailfinders responded on the 20 minute mark and took the lead at the end of the first quarter. A series of penalties gave them a lineout just 20 metres out, and despite the maul collapsing it opened up for Jordan Burns who dummied and then had a clear run to the line in trademark fashion. Shingler’s impressive touchline conversion put his side 7-5 ahead.

That proved to be the last score of the first third as both sides failed to create any more chances, and the Trailfinders headed in to the first break with a two point advantage.

The Green and Whites had much more intent in the second third, and started in perfect fashion as Simon Uzokwe powered over just two minutes after the restart. A penalty just five metres out saw them tap it, and the number eight was never going to be stopped from such close range as he crossed for the second try. Shingler converted from in front of the posts as the lead grew to nine points.

Richmond looked to respond immediately and went very close to their second of the afternoon. A penalty advantage gave them free ball and a cross-field kick had Max Trimble in acres, but Burns raced back to stretch in front of him and save a certain ty.

Ward’s side withstood a large period of pressure before making a decisive blow on 45 minutes as they forced the referee to award a penalty try. They had made their way from their own line all the way in the Richmond 22, and after multiple penalties they went for a rolling maul, which was brought down as it powered over and gave the referee no option but to run under the posts. The seven points gave them clear daylight as they went 21-5 in front.

The visitors then made a whole host of changes as a number of Trailfinders Rugby Academy players got their first taste of first team action, and Charly Tchen was needed to stop a Richmond attack as they ran clear but the winger held firm to stop the attack.

Simon Uzokwe then went over for his second try with the final play of the next spell as the Trailfinders began to flex their muscles. A penalty just five metres out was tapped quickly by Cameron Terry, and then from the next phase Uzokwe had too much for the Richmond defence. The extras from Shingler meant that the visitors had a 23 point lead heading in to the next break.

Richmond started the final 20 minutes strongly and got their second try with just three minutes played. An ambitious counter attack saw them around half way, and then it opened up for Dan Kelly who threw a dummy before racing through from 35 metres out. The conversion cut their deficit to 16 points.

They scored again just five minutes later as they looked to continue their comeback. As the match opened up they entered the 22, and then a penalty was taken quickly by Callum Watson who was never going to be caught from just 10 metres out.

Their hopes of a comeback were ignited further with just five minutes left as they crossed for try number four. They built patiently all the way up to the line, and then eventually Alex Goble stepped his way over for his second of the day. Landray’s conversion meant the lead was down to just four points.

Richmond smelt blood and were rampant as they went in pursuit of the victory. They created space out wide and had an overlap, but crucially the pass went forward and the Trailfinders survived.

Abongile Nonkontwana secured the win in the final minute as he crossed for his first try for the club. Bobby Beattie, who was busy in the midfield all day made a great break, and then the ball was spun straight to the South African who bundled over in the corner.

The ball was then smashed in to touch from the restart to confirm a derby day win, and give Ward’s men another confidence boost before the Championship opener at Nottingham next Sunday.