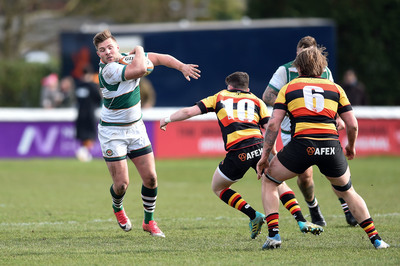 Ealing Trailfinders suffered a disappointing defeat as a late try gave Richmond a 24-22 victory at the Athletic Ground.

Richmond made a strong start and took an early lead through Rob Kirby when he kicked a 30 metre penalty after just seven minutes to give them a 3-0 advantage.

That was just after the Trailfinders had made a couple of half chances with breaks from Will Harries and Lewis Jones, but in the blustery conditions it made handling very difficult and resulted in knock-ons.

Richmond made the early pressure pay as they scored the first try of the match to go further in front. They went through 29 phases in the Trailfinders’ 22 and eventually went over as Will Goodrick-Clarke drove past the final defender from just one metre out. Kirby’s conversion extended their lead to 10 points.

That seemed to wake the visitors up and they immediately responded with a try from Matt Cornish. Will Harries made another break and was brought down, but in the process a yellow card was given to Richmond’s Luc Jones for killing the ball. From the resulting penalty the ball was kicked to the corner and Cornish was able to dot down from the back of the maul. The conversion went wide but the deficit was now just five points.

Harries, who was busy early on then broke through the defensive line again as he continued to look dangerous on the right wing but as the ball came back a Richmond hand disrupted the attack and allowed them to clear.

Kirby then had another penalty attempt due to the visitors struggling at scrum-time, but the ball held up in the wind and the scoreboard remained 10-5 as we approached the half hour mark.

The Green and Whites then upped the tempo in the closing stages of the first half as they looked to take the lead. Two big carries from Jordan Els and Kieran Murphy took them right up to the try-line but a knock on allowed Richmond to escape once more.

The Trailfinders continued to have most of the possession but with the final play of the half a crucial moment saw Cameron Mitchell intercept and run under the posts from 50 metres out to put the hosts further in front. Kirby’s conversion put them 17-5 ahead at the break after a frustrating opening half for the visitors.

Ben Ward made a number of substitutions at half time and they paid off as a side full of intent re-emerged from the changing room. Richmond had a scrum just five metres from the line but a penalty for the Trailfinders signaled a change in the tide and sparked a revival.

They had the ball 30 metres from the line and David Johnston floated a perfect pass over the top of the defence to Kieran Murphy on the wing who had the power to run through for the first points of the second half. The conversion went wide but they were now firmly back in the match with half an hour remaining.

The Trailfinders then completed the comeback with an incredible spell which saw them score twice in a minute to take the lead. Rayn Smid pounced on a loose ball and met a completely open back field so he had the pace to run through unattended and dive under the posts. Peter Lydon’s conversion made it 17-17 to level the score, and they took the lead just 30 seconds later.

Alun Walker gathered the restart and passed straight to Andrew Durutalo who again met a 50 metre patch of grass with no cover and he coasted through to put his side in front in dramatic circumstances. The conversion blew wide in the wind but the Trailfinders were ahead for the first time in the match.

Despite going in front the visitors struggled to build on that and it would be Richmond who took the lead with just eight minutes left to the delight of the home crowd. They had a series of scrums deep in the Trailfinders’22, and spun the ball straight to Henry Cheeseman who ran over the final defender to score. Kirby added the extras to put Richmond two points ahead.

Ward’s side then went within inches of scoring as Lewis Jones chased Kieran Murphy’s kick but an unfortunate bounce meant that Richmond escaped. The Trailfinders kept coming however and went deep in to their 22 with the final play but were stripped of the ball and the hosts smashed the ball out to confirm a frustrating defeat.