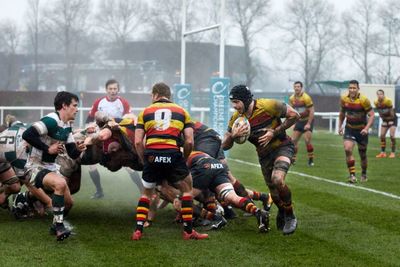 Ealing Trailfinders ensured they will be top seeds for the knockout stages of the British and Irish Cup with a clinical 24-0 victory over Richmond at the Athletic Ground.

In wet and windy conditions an expansive game was never looking likely, but tries from Alun Walker, Luke Daniels, Peter Lydon and James Cordy Redden meant that Ben Ward’s men recorded their sixth win from six matches in the competition.

Despite the bonus-point win it was the defence that received most of the plaudits, limiting Richmond to a scoreless 80 minutes after a relentless performance.

The West Londoners got off to the perfect start with a try from Alun Walker giving them an early lead. A penalty was kicked to the corner and the rolling maul powered towards the line before the Scottish hooker broke away to score. Luke Daniels converted, and gave his side a 7-0 advantage after six minutes.

Daniels went within inches of extending the lead just three minutes later, but James Cordy Redden’s kick ahead was gathered by a stretching Richmond arm who denied a certain try.

Rob Kirby had a chance to put the hosts on the scoreboard but his penalty fell just short, before Daniels was denied again by the bounce of the ball as the Trailfinders looked to extend their advantage.

With the rain still falling both teams used the boot at every opportunity to gain territory, but the score would remain unchanged in the first half as Ben Ward’s men headed back to the changing rooms with a 7-0 lead at the break.

There was barely anything between the two teams in the first half and it looked too close to call, however in the third quarter the Trailfinders would pull away with some exceptional wet-weather rugby to put the result beyond doubt.

The in-form Luke Daniels scored a brilliant individual try on the 45 minute mark to give his team some breathing space. A kick out wide was gathered by the full-back on the touchline, and he bounced his way past a number of defenders before racing away from outside the 22 to dive over the line. The conversion went wide but the visitors now held a 12-0 lead, which in the conditions was a commanding one.

Just three minutes later Peter Lydon crossed the try-line to extend the lead further. With the ball deep in the 22, instead of going through the forwards the ball was spun wide and Lydon stepped his way past the final defender to bundle his way over the line. Daniels converted, and edged the Trailfinders 19-0 in front.

The bonus point score was secured with 55 minutes on the clock as James Cordy Redden marked his return to the starting line-up with a try. A set move from the top of a lineout with a number of dummy runners saw Daniels in acres of space, and with a two on one he drew in the final defender before releasing Cordy Redden who scored in the corner. The conversion went wide, but the fourth try all but confirmed the Trailfinders’ place as top seeds for the knockout stages.

With the bonus point in the bag it was the defence that took over as Richmond looked for a way back in to the match, but the forwards absorbed a huge amount of pressure to ensure that the clean sheet was intact.

A penalty earned with just four minutes remaining was met with huge cheers from the players after soaking up phase after phase, which summed up the defensive effort throughout the 80 minutes.

Referee Christophe Ridley blew the final whistle to confirm the victory, and a very satisfying one for the travelling supporters.

The result means that Vallis Way will host a Quarter Final on the weekend of 30/31st March, with opposition and the exact date to be confirmed in due course. Stay tuned to our social media channels to stay up to date with all the appropriate information regarding the knockout stages.