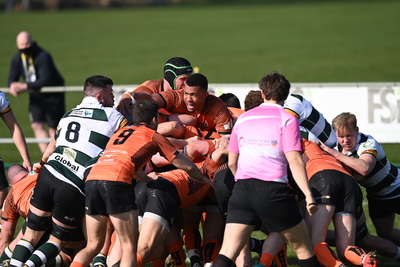 Ealing Trailfinders made the perfect start to the new Greene King IPA Championship season as they recorded a thunderous 52-3 victory over Nottingham at Lady Bay.

Ben Ward’s men scored eight tries in total in a dominant display to register a bonus point win on the opening day of the campaign.

Guy Thompson, Fraser Strachan, Angus Kernohan and Harry Casson all crossed the line whilst Alun Walker and Craig Hampson both scored twice in a memorable victory.

A relentless first half display gave them the platform to secure the win, as they had the four-try bonus point wrapped up in the opening 35 minutes.

Ward’s side came flying out of the blocks and Jack Tovey was inches from scoring inside three minutes. The centre picked a great line in the midfield and it looked like he had the pace to cruise over, but a last ditch tap tackle meant it remained scoreless.

They didn’t have to wait long though for the opening try, as Guy Thompson scored four minutes later. With possession on the half way line, a fizzed pass created an overlap on the left hand side, and the back-rower dummied past the final defender before racing clear from 25 metres to dive over the line. Craig Willis’ impressive conversion but his side 7-0 ahead.

Nottingham then got on the scoreboard as Alex Dolly kicked a penalty from in front of the posts, but the West Londoners them dominated the rest of the first half to pull away from their opponents.

A sequence of penalties took them to within 10 metres of the try-line, and then in trademark fashion Alun Walker pounced at the back of the rolling maul to open his account for the season and extend the lead to nine points.

The hosts were then looking for a way back in to the match, but their ambition caught them out as Craig Hampson sniffed out an interception on the half way line and he couldn’t be caught to dot down under the posts. Willis added the extras, giving the visitors a 19-3 lead with 25 minutes on the clock.

The bonus point then came five minutes before half time as Fraser Strachan stepped his way to the line. Sustained pressure in the 22 meant that the Green and Whites were edging closer, before Willis’ powerful pass gave Strachan the perfect timing and he wouldn’t be stopped from 10 metres out. The conversion gave the Trailfinders a 26-3 lead as half time approached.

A big carry from James Cordy Redden on the wing nearly set Strachan up for his second try in the last play of the half, but he was penalised for holding on and Ward’s men headed down the tunnel with a convincing lead after a highly encouraging opening 40 minutes at Lady Bay.

The second half started in the same fashion as the first, with the Trailfinders enjoying the majority of possession. A penalty was kicked in to the 22, and then after a few phases Alun Walker carried and had too much power for the Nottingham defence. The conversion meant the lead was now up to 30 points.

The bench was then emptied for the final quarter, and to the delight of the coaches the intensity went up a level as the performance continued to improve.

Angus Kernohan’s brilliant individual finish on the right wing secured try number six on the hour. The ball was spun wide to the former Ulsterman, and he bumped his way over two scrambling defenders before diving in the corner to score.

It kept getting better for the Trailfinders, and they scored again just five minutes later as Hampson crossed for his second. Harry Casson picked an outstanding line in the midfield and looked as if he would score himself, but he popped it up to the scrum-half who could dive over from close range. Steven Shingler added the extras to take the lead above 40.

There was still time for one more try before the end, and Casson got a deserved try with just five minutes left to round off the win in style. Again he found himself in space after an aggressive carry, and this time he had no defenders in front of him as he sprinted to the line from 15 metres out to score a very popular try amongst the squad. Shingler’s conversion confirmed a monstrous 52-3 victory, and gave the West Londoners a mightily impressive start.

They welcome Ampthill to Trailfinders Sports Club next Saturday for Round Two, and will be looking for more of the same as they aim to build on a fantastic start.