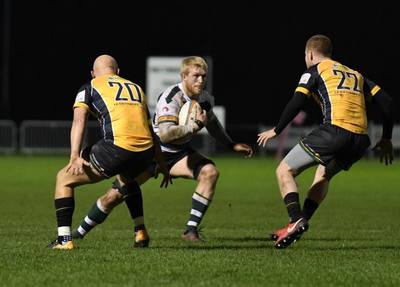 Ealing Trailfinders suffered an agonising late defeat, with a 79th minute penalty from Tiff Eden securing a 28-27 victory for Nottingham at Lady Bay.

The West Londoners came within seconds of completing a memorable comeback after they came from 22-0 down to lead 27-25 only to be defeated in the final minute.

The Trailfinders will look back at the opening 20 minutes as their downfall as they conceded three early tries, and apart from that were the dominant side for the following hour.

Nottingham started impressively and scored with five minutes on the clock to open their account for the afternoon. The hosts had sustained pressure in the Ealing 22, and the ball found Oli Evans who stepped his way through the defence to score. Tiff Eden’s conversion gave his side a 7-0 advantage.

Just two minutes later the lead was extended as Oli Evans went over the line for the second time in 120 seconds. A cross kick floated over the pitch and eventually found the centre who was again able to evade his defender to score. The conversion went wide, but it wasn’t to be long before another score but them in control of the match.

From the top of a lineout winger Billy Robinson crashed his way through three tackles from outside the 22 and showed his pace to race clear and dive under the posts. Eden’s conversion gave Ian Costello’s side a 19-0 lead after just 13 minutes.

Eden kicked a penalty to push the lead to 22-0, before the Trailfinders woke up and began to show the form which has been with them throughout the opening to the 2017/18 campaign.

Mark Bright went within inches of scoring but the ball went forward at the crucial moment, however Ben Ward’s side were growing in confidence as they looked for a way back in to the game.

The comeback began on the 30 minute mark with Alun Walker driving over from a rolling maul to get their first points of the afternoon. Peter Lydon’s conversion cut the deficit to 22-7.

Walker scored an identical try with 37 minutes on the clock to reduce the gap again. From a lineout the hooker was at the back of a maul and claimed the ball before dotting down. It looked as if the teams would be go in at half time with Nottingham leading 22-12, but it got even better for the Trailfinders with the final play of the half.

In-form winger Will Harries scored one of the tries of the season so far to bring Ealing within one score. Joe Munro burst out of the 22 before offloading to Mark Bright, who drew in the final defender and released Harries who had the pace to run in unattended. The conversion went wide, but in the space of five minutes the Trailfinders had scored 17 points to get back in to the match.

Eden’s first act of the second half was to kick a penalty and extend Nottingham’s lead to 25-17, but the London side were creating a number of chances as they looked for the bonus point score.

Rory Clegg came on to increase the tempo in the back-line and Piers O’Conor had a chance on the 50 minute mark. Seb Stegmann took a high ball and set the centre free, but as he entered the 22 the ball went forward and play re-started with a Nottingham scrum.

Joe Munro then bundled over the line on the hour mark to secure the try bonus point and cut the deficit to just one point. The maul, which had been an impressive weapon all afternoon was rumbling towards the line, and Munro broke away from close range to score. Clegg converted, which meant that Nottingham’s lead was 25-24 with 20 minutes to go.

Ealing continued to press as they looked to take the lead, and Lewis Jones had an opportunity on the left wing but his kick ahead fell kindly for the hosts who were able to clear without danger.

The game burst in to life again with five minutes remaining, as a penalty for the Trailfinders allowed Clegg to kick his side in to the lead. He was successful which meant that for the first time in the match Ealing were in front as the clock ticked away.

However from the re-start Ealing were penalised and gave Nottingham the chance to re-gain the advantage. From 45 metres Eden struck impressively to edge them 28-27 ahead to the delight of the home crowd.

The visitors refused to lie down and had one last chance from a scrum but Nottingham were awarded a penalty which allowed them to kick the ball dead and secure a nail-biting victory.

The Trailfinders stay second in the table but will look to respond positively, and are back in action next Saturday when they take on Doncaster Knights at Vallis Way.