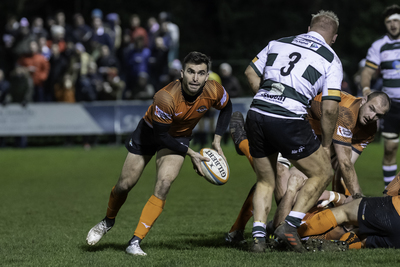 The West Londoners controlled the game and were deserved winners as they ground down their opponents before Reon Joseph crossed for two tries in quick succession to seal the victory.

The Trailfinders started with plenty of intent despite the tricky conditions and got straight on the front foot with just five minutes on the clock. Steven Shingler kicked a penalty from in front of the posts to give the visitors a 3-0 lead, and for the remainder of the first half there was nothing between the sides with most of the game played in the middle third.

A five metre scrum on the half hour mark gave the visitors the perfect platform to extend their advantage and after four penalties were awarded it appeared that a penalty try was inevitable, however the ball was then spun wide and Nottingham managed to escape.

Ben Ward’s side had 68% of the possession in the first half but struggled to convert that dominance in to points, and Nottingham were rewarded for their persistence in defence with a penalty just before the break, with Shane O’Leary making it 3-3 at half-time.

The Trailfinders then burst in to life in the early stages of the second half to take control of the game with two tries in four minutes from Reon Joseph.

A stolen lineout saw Jordan Els on the charge in attack, and Rayn Smid then broke through the defence and combined with Pat Howard before releasing Joseph on the left wing who used his pace to dive over in the corner. The conversion went wide, but from the restart another try was scored to give the visitors breathing space.

With possession deep in the Nottingham half, the ball went through the hands all the way to Joseph again who stepped past the defender to score again. This time the conversion from Shingler sailed through the posts, putting them 15-3 up with 25 minutes remaining.

The game then started to open up in the final quarter but the Trailfinders stuck to their game plan and despite Alun Walker going to the sin bin they kept their try-line intact.

Shingler added another penalty to edge his men further ahead, but Nottingham made it a nail-biting final 10 minutes after a length of the field try from Sean Scanlon.

With a lineout on their own line they broke and then went through the hands impressively, allowing the full-back to run clear with a try of the season contender. O’Leary’s conversion cut the deficit to eight points with as many minutes left on the clock.

Just as the hosts looked for another route back in to the match a crucial penalty allowed the Trailfinders to play the final five minutes deep in the Nottingham half. They kept the ball before Walker smashed it in to the stands, confirming a first ever win at Lady Bay and a much-needed victory to start the year in style.