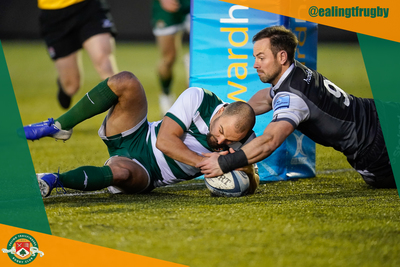 Ealing Trailfinders suffered a narrow 21-12 defeat against Newcastle Falcons in the second leg of the pre-season double header.

Ben Ward’s side had an early lead and enjoyed the majority of the possession in the first half, but failed to convert their dominance in to points which ultimately cost them a second victory over the Falcons.

The Green and Whites were the better side in the opening exchanges and had the chance to take the lead in the ninth minute, but Craig Willis’ penalty was dragged wide by the wind and the flags stayed down.

Shaun Malton flew through the defensive line and powered in to the 22 but was hauled down just short of the try-line as the Trailfinders got closer to opening the scoring, and then a huge chance for Angus Kernohan saw the winger go within inches of a try.

Max Bodilly stepped his opposite number and glided down the touchline to create a two on one, and let the former Ulsterman race away but in the act of scoring he was agonisingly dragged in to touch.

A string of penalties then followed for the West Londoners, and they finally got the try they deserved with 24 minutes on the clock.

Simon Uzokwe took a quick penalty and took the ball right up to the line, so with an overlap Willis floated a delightful 20 yard pass that fell right in to the hands of Kernohan who scored his second try in as many matches for the club. The conversion from the touchline went wide, but there was some recognition on the scoreboard for the impressive start.

After the drinks break it was all Newcastle for the remainder of the first half as they looked to get back in to the match. With a five metre scrum they were powering closer to the line, but in a remarkable defensive effort the Trailfinders held them out for nearly 10 minutes.

Eventually however the pressure told in the final play of the half, as Sean Robinson went over the line from just one metre out. Brett Connon’s conversion from in front of the posts gave the Falcons a 7-5 lead at the break.

Newcastle started the second half in the same way that they finished the first, and extended their lead just four minutes after the restart.

A penalty was kicked to the corner, and George McGuigan drove over from just five metres out to give them the perfect start. Connon converted again, edging them nine points ahead.

The Trailfinders then made a whole host of substitutions as the squad got some much needed game time, and it had the ideal impact as Jordan Burns scored a trademark try just before the hour mark.

The scrum-half spotted a gap in front of him from the base of a ruck, and raced away from 30 metres, beating four defenders en route to the try-line in sensational style. David Johnston added the conversion, and all of sudden the deficit was just two points.

As the West Londoners went in search of the lead they were living dangerously around the fringes, and a dropped ball which fell to Adam Radwan could have been disastrous but Burns got back admirably to stop an almost certain try.

Burns, who was extremely busy when he came on then cleared with a box kick and in a wicked bounce it was incredibly close to dropping straight to Dean Hammond, but it escaped his clutches and Newcastle survived.

Barney Maddison was then sent to the sin-bin and Newcastle took full advantage of the extra man, as Jamie Blamire drove over from another rolling maul to secure the match for the Falcons. Connon’s touchline conversion crucially meant the lead was past a converted try, as the scoreboard read 21-12.

Jordan Burns was then put in a gap as Max Bodilly made more space on the left wing, but this time the sidestep was unable to get him past the final defender and the opportunity went away.

The Trailfinders Rugby Academy then got deserved recognition as Declan Raubenheimer and Reuben Knight entered the pitch for the final stages, but the Falcons saw out the remaining minutes to record a hard fought victory.

The Trailfinders came out on top 50-38 across the two matches, giving them plenty of optimism as they head in to back-to-back games with Bristol in a fortnight.