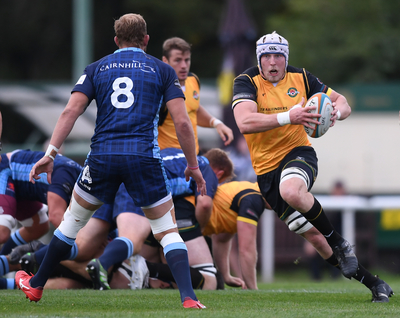 Ealing Trailfinders survived a late scare to record their first win of the season after leaving the Athletic Ground with a 36-31 bonus point victory against London Scottish.

Ben Ward’s side were cruising with a 36-12 lead with just 20 minutes left on the clock but the Scots responded to make for a nerve racking ending against the Exiles.

Tries from Guy Armitage, Laurence May, Howard Packman, Alun Walker and Ben West made sure that the Trailfinders got the full five points to get a much needed victory.

The Trailfinders made a rampant start to the match as they looked to put last weekend’s result well and truly behind them. Laurence May’s early penalty gave Ben Ward’s men the lead with six minutes on the clock, and the visitors never looked back as they took control of the match in the first half.

Luke Carter’s clever box kick in behind the Scottish defence was inches away from falling in to the hands of Howard Packman, but that was just a warning sign as the first try followed with nine minutes on the clock.

A lineout just outside the Scottish 22 found it’s way in to the hands of Guy Armitage, and the centre bulldozed his way through four defenders before racing clear in impressive fashion. May, who was on great kicking form all afternoon extended the lead to 10 points with a conversion.

The second try came just before the 20 minute mark courtesy of Laurence May. Andrew Durutalo burst through the middle from a ruck on the half way line, and he drew in the final defender before releasing May who had the pace to dive over the line.

Scottish then responded with a try from Charlie Ingall on the wing. After a number of phases they took themselves right up to the line, and with an overlap on the right hand side Ingall scored in the corner. Rory Jennings converted from the touchline to cut the deficit to 7-15, but that then triggered the Trailfinders to turn their performance up again.

Howard Packman scored a brilliant try with 10 minutes remaining of the first half as the visitors extended their advantage. The winger, who got the ball well inside his own half beat his opposite number and then played an impressive one-two with Rayn Smid before using his pace to race to the line. May again converted as the Green and Whites went 15 points in front.

The bonus point try then followed as Alun Walker got his first try of the season from a rolling maul. A penalty was kicked deep in to the Scottish 22, and after the maul powered towards the line the hooker broke away in trademark fashion to dot the ball down. May’s conversion put his side 29-7 in front with half time fast approaching.

It was the home side however who ended the half stronger, as Pete Austin got their second try of the match as the hooker dummied from close range to score. The conversion came back off the post, and that signalled the half time whistle after an eventful opening 40 minutes at the Athletic Ground.

The second half continued in the same fashion as the first, with the Trailfinders wasting no time to add to their lead. After going through the phases in the Scottish 22, a pop pass hit Ben West just inches from the line and he used his strength to run over the last defender for try number five. May again converted, putting Ben Ward’s men 36-12 ahead.

Both sides then looked to capitalise on some lengthy spells of possession whilst the game lost some of it’s structure with the replacements coming on, and it was the hosts who were next to score to get back in to the match.

A penalty was quick tapped by former Trailfinder Grayson Hart, and a number of fast passes meant that they had an overlap on the wing which allowed Ingall to squeeze over for his second of the match.

The Scots then went over for their bonus point try with 15 minutes left as Ed Hoadley scored just seconds after coming on. A chip in behind bounced awkwardly which fooled Packman, and it fell in to the hands of the scrum-half who scored under the posts. Jennings converted to cut the deficit to 12 points.

Ben West was then sent to the sin bin as the pressure increased, and Billy Harding then scored from close range to send the home crowd in to raptures. Jennings converted to set up a grand stand finish.

A scrum gave the Trailfinders some much needed possession, and they went through the phases in the final five minutes to hold out for a memorable victory as Craig Willis smashed the ball in to touch to signal the final whistle.