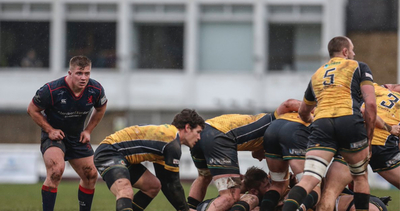 Ealing Trailfinders returned to Greene King IPA Championship action with a hard-fought 25-3 victory over London Scottish at the Athletic Ground.

For the second week in a row the Trailfinders headed over Kew Bridge and kept their opponents try-less, with the defence once again the highlight in very challenging conditions.

Tries from Alun Walker, Mark Bright and a penalty try ensured that Ben Ward’s men earned their ninth consecutive victory in all competitions ahead of welcoming Bristol to Vallis Way in their next outing.

It was a very tight opening to the match and after a significant down pour of rain ahead of kick off both sides were trying to use their kicking game to gain territory.

Jake Sharp kicked the Scots in to an early 3-0 lead, but that was to be as good as it got for the hosts after the West Londoners began to grow in to the match.

Lewis Jones saw an early chance pass by with 10 minutes on the clock, the centre raced away from the half way line but was eventually caught up by the defence and bundled in to touch.

Luke Daniels levelled the score with a penalty, and they then took the lead as Alun Walker went over the line in trademark style.

A five metre lineout was gathered, and the forwards powered towards the line before the Scottish hooker broke away to score. Daniels converted from the touchline to extend the lead to 10-3, and that was how the score would remain until the break as the teams went down the tunnel after a tough 40 minutes.

Ben Ward’s men were forced to defend in the opening stages of the second half as the Scots rallied, but they held firm and managed to earn a penalty which was met with huge cheers.

Daniels’ second penalty extended the lead to 13-3 to take the advantage past a converted try, and in the final 20 minutes the Trailfinders took control of the match.

Mark Bright scored against his former club to put the result beyond doubt with 15 minutes left on the clock. Another five metre lineout powered towards the line, and the Club Captain bundled over the line to stretch the advantage to 18-3.

Dan Grant Adamson came on at scrum-half and his box kicks were putting the visitors in the right places to attack. A scrum five metres from the line saw the pack which was boosted by the bench hammering towards the line, and after a number of penalties the referee eventually went under the posts to award the Trailfinders a penalty try.

That gave them a 25-3 lead with three minutes remaining, and despite rallying in attempt to get a four-try bonus point they had to settle with just the victory which maintained their place in second in the Championship table.