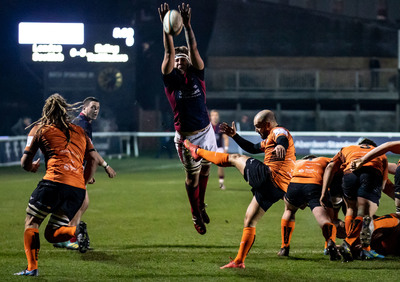 Ealing Trailfinders continued their brilliant start to 2020 with a fantastic 42-26 bonus-point victory against local rivals London Scottish at the Athletic Ground.

The Trailfinders produced a sublime second-half performance, scoring four tries in the second 40 minutes to run away with an impressive win.

Tries from Tommy Bell, Sam Dickinson, Reon Joseph and two from Jordan Els ensured that the Green and Whites made it three wins in a row.

Ben Ward’s side looked in imperious form from the kick off and took the lead after just three minutes. The hosts fumbled Craig Willis’ kick, and straight away they were punished as from the scrum a penalty was given, and Willis dissected the posts to put his side 3-0 in front.

The Scots then looked for an immediate response and very nearly got one courtesy of Matas Juvericus. The second-rower broke the defensive line and powered towards the line, but he was eventually brought down just short and the visitors survived.

Both sides then struggled to gain the ascendancy for the remainder of the first quarter with handling errors proving costly, however the Trailfinders pounced on an error to extend their advantage. Jordan Burns’ box kick bounced up to Jordy Reid who looked to be clear, but the referee came back for an early penalty which Willis kicked to make it 6-0.

That kick then brought the game to life, and Scottish opened their account on the 25 minute mark. They entered the 22 and a loose grubber bounced perfectly for scrum-half Josh Barton who was able to dive over the line. Harry Sheppard’s conversion then put the hosts ahead for the first time in the match.

Willis then kicked his third penalty to edge the Trailfinders ahead once again, but it wouldn’t last long as Scottish scored with five minutes of the first half remaining, in a frantic ending to the opening 40 minutes.

Sheppard saw some space in behind and kicked in to the 22, and again the ball bounced up in favour of the hosts, this time for Bobby Beattie who stepped the final defender to score. The conversion put them 14-9 ahead, but that wouldn’t be the last of the action.

The restart was gathered straight away by Reon Joseph, and then after going through endless phases Jordan Els picked up from the base of a ruck and powered over for the second week in a row. Willis, who had his kicking boots on all evening kicked the conversion to give the Green and Whites a 16-14 lead at half time.

The Trailfinders made the perfect start to the second half as they began to pull away from the Exiles. A huge carry from Rayn Smid took his side up to the 22, and then a smart inside pass from Jordan Burns at the fringe of the ruck fooled the Scottish defence and allowed Tommy Bell to race away from outside the 22. Willis was again on the money with the conversion, extending the lead to nine points.

That start got even better just two minutes after as Jordan Els went over for his second try of the evening. Reon Joseph and Lewis Jones picked off a Scottish attack with their high defensive press and then the ball went through the forwards from deep inside the 22, with Els eventually able to cross from just one metre out. The extras were added from Willis which brought up the 30 point tally.

The try bonus point then arrived just before the hour mark to seal the victory for the Trailfinders. A five metre lineout was mauled towards the line and after falling just short Jordan Burns sniped to within touching distance, allowing Sam Dickinson to score from the next phase in the corner to the delight of the travelling supporters.

Ward’s men then looked to add further gloss to the scoreboard and went in search of try number five. It came within inches of Reon Joseph, but just as he looked to have a walk-in the final pass was behind him and bounced in to touch.

Scottish then rallied in the closing stages as they had their sights set on a try bonus point of their own, and they got their third with 10 minutes remaining. Two penalties in a row took them in to the 22, and then a wide looping pass fell in to the hands of former Ealing skipper Mark Bright who stepped his way to the line to cut the lead to 16 points.

Reon Joseph then crossed for a deserved try with five minutes left to give the Trailfinders fans even more to cheer. With advantage in the 22, Steven Shingler fizzed an outstanding 20 metre pass all the way to the winger who was there to pounce and stride over in the corner. Willis added the extras from the touchline to take the advantage up to 42-19.

The hosts did get their bonus point in the final play of the match as Craig Duncan crossed for their fourth of the evening, but that proved to be the last of the action as the referee blew the whistle to confirm a superb win for the Trailfinders.