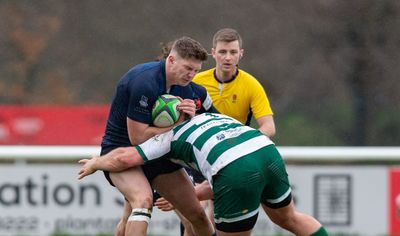 Ealing Trailfinders made the short trip south to The Rag on Saturday afternoon to face London Scottish in their rescheduled Championship Rugby West London derby.

Looking to bounce back from defeat last week, the men in green and white were aiming to come out firing and gain precious points on the road, as the club look to push for the Championship title with just four games remaining.

It was the home side that enjoyed possession for the opening spell; however just a couple of minutes into proceedings, Simon Linsell was on hand to block an attempted grubber by the Scottish attack. The ball would see Luke Daniels collect, shrugging off his tackler; he broke free to score, fly-half Craig Willis adding the extras.

Just five minutes later, Trailfinders worked the ball well inside Scottish’s 22 with a group of dominant forward carries, being brought down 5 metres out; a loose ball was then picked up by Bobby de Wee, who looped an offload onto the wing where Rayn Smid was found, beating one man and taken down by the other, he showed great physicality to reach over the line and dot down. Before they knew it, an early lead opened up for the Trailfinders in a must-win game.

Scottish looked to bounce back shortly after, showing some initiative with a clever chip and go, which saw their attack pin Trailfinders inside their own 22. The subsequent line out was to lead to nothing, though, as Trailfinders defence would win a penalty at the breakdown through de Wee.

Less than 15 minutes on the clock, and it was a third for Trailfinders and a second of the afternoon for Daniels. Another powerful line break by Smid saw the ball offloaded, Craig Hampson picking up the pass only to feed in Daniels, who unopposed dotted down between the sticks once again.

It was just the start that Trailfinders were looking for, and within half an hour, the bonus point was secured. The ball worked from byline to byline, leading to a line break; this time by de Wee. The ball was then spun back to Max Bodilly, who would feed in Pat Howard in space on the wing to dot down for the bonus-point score.

Scottish had put up a real fight; however, another penalty conceded at the scrum saw the men in green and white run in once again before the break. A powerful first-half performance rewarded as a rolling maul from the line out after a won scrum at the halfway saw Smid dotting down for the second time in the tie, after the backs came in to drive the pack over the whitewash.

Looking to start the second half where they left off, Trailfinders stripped the ball from Scottish hands at the halfway line; working play out to the wing saw Bodilly once again make metres well into the Scottish half. Phases later, a well-sold dummy by Craig Willis saw him just metres away from the try line before offloading to Lewis Thiede, who, whilst being tackled, found David Johnston free to fight his way over and score the travelling sides sixth of the game.

In what was becoming a full force Trailfinders performance, hard work once again by the Trailfinders forwards saw Simon Linsell fire his way over and dot down.

Scottish showed early attacking promise, but the game was all Trailfinders, and after only being on the pitch for a matter of minutes, Jordan Burns scored his first try of the afternoon. In an attempted snipe around the ruck, he was held up in the tackle by the feisty London Scottish defence. It wasn’t until his teammates arrived that they managed to force him over the line, bringing an immediate impact to his arrival.

Midway through the second half, Smid was to go over for his Hat-Trick. Another well-worked line out saw the attack go through the phases before another dominant carry by the eight saw his score once again.

Moments later, Ealing Trailfinders turned the ball over once again, while London Scottish were on the attack in Trailfinders 22. Jordan Burns spotted a gap down the blindside and showed blistering pace to break free. The covering defence tried to stop him, but he stepped around their backtracking full-back and dived over the line.

As we moved into the final quarter of the game, Angus Kernohan found space down the righthand side and chipped the ball over the full-back and regathered but was brought down just 5 metres out. The ball was then worked all the way out to the left, where Simon Linsell was waiting for a straightforward run-in.

The clock was running out, but Trailfinders still had time for more action, Burns snipping once again; this time, he was tackled but managed to offload to a supporting Will Davis, who crashed over the try line to score.

The final try of the afternoon saw Linsell complete his hat-trick. Will Davis breaking through the first line of defence, popping it up to Linsell, who cantered in for his third, sealing a comprehensive away victory for Ealing Trailfinders.