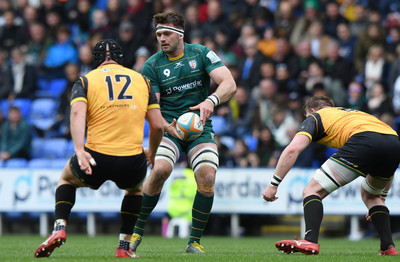 Ealing Trailfinders ended the Greene King IPA Championship season with a 33-12 defeat to London Irish after a dramatic match at the Madejski Stadium.

Ben Ward’s men were unfortunate to be on the end of a misleading result after creating a number of opportunities which could have seen an entirely different scoreboard.

The hosts made the perfect start and went in front after just two minutes with a try from Brendan Macken. A loose clearance gave Irish front foot ball, and after Albert Tuisue broke the line he passed wide to the centre who beat the last defender to score in the corner. Jacob Atkins converted from the touchline to give them a 7-0 advantage.

Irish continued their dominant start and scored their second try with 10 minutes on the clock to go further ahead. A long kick gave Alivereti Veitokani acres of space, and he raced away from 60 metres to score an impressive try as the home crowd continued to celebrate. The conversion went wide but the Champions held a 12 point lead in the opening stages.

The Trailfinders then woke up and scored a brilliant try to get back in to the match. A penalty was kicked in to the 22 and after going through the phases the ball spun to Reon Joseph who broke through three defenders and dotted down to get the visitors on the scoreboard. Peter Lydon added the conversion to cut the deficit to just five points.

Joseph, who has been in sensational form then went just inches away from bringing his side level. Once more he stepped past four Irish players as he entered the 22, but he was brought down just short and then an ambitious pass found touch as the hosts escaped.

Irish were forced to absorb plenty of pressure from the Trailfinders for the remainder of the first half, but after shutting the visitors out they extended their lead with another opportunistic try. Topsy Ojo entered the 22 and an overlap opened up on the left hand side, allowing him to pass to Albert Tuisue who dived over the line. Atkins again converted as the lead went back up to 12 points.

Then came a crucial moment just before the break as Ward’s men put themselves right back in contention. Teofilo Paulo was sent to the sin-bin for the hosts, and they were punished with a try in the final play of the half. A set move from the back of a lineout created some space back on the short side, and Laurence May fizzed a perfect pass to Segundo Tuculet who crept over in the corner. The conversion went just wide, but the Trailfinders were now just seven behind as the half time whistle blew.

The Trailfinders kept up the momentum early in the second half and went close to drawing level straight away. From the top of a lineout the ball was spun to Laurence May who kicked over the top to Segundo Tuculet. The centre drew in the final defender and had Rayn Smid on the inside but his pass was agonisingly forward and the referee gave Irish the put-in.

Ben Landry then made a barn-storming run as he pounced on Max Davies’ pass and charged towards the line, but the frustration grew as from the resulting phase a knock on let Irish off the hook once again.

Against the run of play Irish then proved how clinical they can be with a try on the hour mark to regain control of the match. As the Trailfinders looked to play out of their own 22 a mix up saw the ball pop out from a collision, and it bounced up for Matt Williams who showed his footballing skills to kick ahead and score. The conversion from Atkins took their lead up to 14 points.

Ward’s men refused to lie down and were next on the scoreboard, but it was disallowed in what was the match deciding moment. Max Davies was able to bundle over to score his first try for the club from close range, but we came back for an earlier infringement which saw Harry Casson red carded and the try was chalked off.

The Trailfinders continued to battle bravely but Irish ended strongly with the advantage of an extra man, and Fergus Mulchrone wrapped up the win after going over from the base of a scrum to score. Stephen Myler’s conversion put their lead up to 33-12, and from the kick off they smashed the ball out to confirm their victory before the trophy presentation.

The two teams meet again next weekend in the Championship Cup Final at Trailfinders Sports Club in what promises to be another huge occasion, tickets are still available and can be purchased by clicking this link.