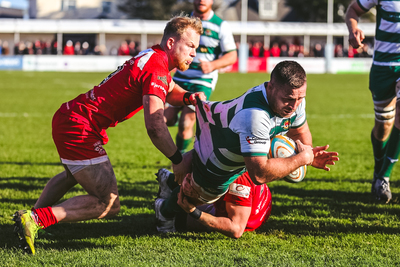 Ealing Trailfinders continued their fantastic start to 2020 with a dramatic 28-24 victory over Jersey Reds at Stade Santander International.

Ben Ward’s side had to rely on a try from Elliot Millar Mills with just seven minutes remaining and then some incredible defence to secure their fifth consecutive victory.

The West Londoners played with intent from the off and set the tempo with a break in the opening minute from Jack Tovey, but after being penalised for holding on Brendan Cope kicked the hosts in to a 3-0 lead.

The response was immediate as Steven Shingler dissected the posts to level the score, and the Trailfinders then took a deserved lead with 15 minutes on the clock.

A penalty was kicked to the corner and then they went through the phases patiently until some space opened up for Rayn Smid who powered over from close range. The conversion went wide, but the visitors now had an 8-3 lead.

However just as the Trailfinders seemed to be in the ascendancy, Jersey pounced on an opportunity and wrestled themselves in front. A lineout just five metres out gave them the chance, and TJ Harris took advantage of the rolling maul to score under the posts. Cope added the extras, putting them two points ahead.

The Green and Whites were looking for another quick response but struggled to break down a resolute defence in the lead up to the break. A number of phases in the 22 looked to have brought them to within touching distance as Jordan Els carried up to the line, but then in frustrating fashion a knock on meant that the hosts survived.

Eventually Ward’s side were rewarded for their possession, as a penalty allowed Shingler to kick them 11-10 in front just before half time as they headed down the tunnel with a narrow lead.

The Trailfinders increased the intensity at the start of the second half and extended the lead straight away. Reon Joseph gathered Shingler’s kick and had Peter Lydon on the inside but we came back for an earlier infringement, allowing the Welshan to kick his third penalty of the afternoon.

Jersey then went back ahead on the 50 minute mark to the delight of the home crowd. A penalty was kicked in to the 22, and then at the breakdown Will Homer spotted a gap and strolled through under the posts. Cope’s conversion gave them a 17-14 advantage with half an hour left.

That sparked the West Londoners in to life and they started to get the upper hand through their physicality. A rip in defence from Elliot Millar Mills created space for Jack Tovey outside, but his kick through was gathered by the hosts.

A five metre lineout was then held up over the line and the visiting fans began to think it might not be their day, but the persistence paid off as Pat Howard scored on the hour. A number of carries took them up towards scoring range, and the South African picked a great line to crash over. Willis’ conversion put them four ahead, but the lead didn’t last long.

Straight from kick off the Reds gathered the ball and spun it wide, which then allowed Homer to use his searing pace and dive over the line. Cope’s conversion re-instated their three point lead.

The Trailfinders needed a moment of magic to edge back in front, and it came courtesy of Elliot Millar Mills to send the travelling fans in to raptures. Harry Sloan broke through the defence and was dragged down just short, but from the following phase an inside pass to the prop who was outstanding all afternoon meant that he could dot the ball down. Craig Willis’ crucial conversion meant that the lead was four points with five minutes remaining.

Jersey then hammered away as they looked for a winner, but the defence stayed impeccable under serious pressure. Jack Tovey’s last ditch tackle stopped a certain try, and then the forwards managed to hold up a rolling maul over the line to frustrate the hosts.

A scrum then needed a huge effort with the final play of the game, and that is exactly what the front-row delivered, allowing them to smash the ball in to the stands and confirm a memorable win on the Channel Island.