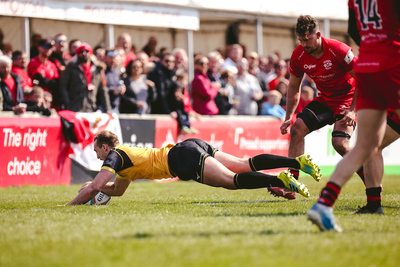 Ealing Trailfinders produced a stunning performance to keep themselves firmly in the hunt at the top of the Greene King IPA Championship after a comprehensive 45-14 victory over Jersey Reds at Stade Santander International.

Ben Ward’s side scored seven tries in their best all-round display of the season as they stunned the Channel Islanders with a dominant showing from minute one to 80.

The Trailfinders made the perfect start in the Jersey sunshine and opened the scoring after just three minutes. Kieran Murphy made a storming break as he battered through three defenders and passed outside to Andrew Durutalo, who drew in the final man before passing back to Murphy who was able to run straight under the posts. Craig Willis added the conversion to give his side a 7-0 lead.

The start got even better for the visitors just four minutes later as they scored their second try after seven minutes. Reon Joseph and James Cordy Redden combined well down the left wing and used their pace to work a way around the outside of the defence, and had David Johnston alongside who had a clear run to the line. Willis was again on target to extend the advantage to 14 points.

Jersey however responded immediately after a frantic opening to the match. After a penalty was kicked to the corner they went through the phases in our 22, and a half break saw Liam Howley snipe his way to the line from 10 metres out. Former Trailfinders Aaron Penberthy cut the lead to seven points with his successful conversion.

The Green and Whites were in rampant mood and restored their 14 point lead straight from the re-start. A penalty was awarded, and from the five metre lineout the maul powered over the line to allow Alun Walker to stretch over from close range. Willis was on form with the boot and his third conversion extended the lead.

The bonus point was then secured before the half hour mark as Kieran Murphy went over for his second try of the afternoon. A series of penalties saw the Trailfinders get up to the five metre line, and once again the ever-reliable rolling maul was unstoppable as it allowed Murphy to break away to score. The conversion was just wide, but the lead was now up to 19 points after a sensational first 30 minutes.

Craig Willis scored try number five just before the break as the Trailfinders continued their momentum in to half time. A five metre scrum saw the ball zipped straight to the fly-half, and he stepped back inside to score under the posts. He converted his own try to send his team down the tunnel with a sensational 33-7 lead at the break.

The second half started in the same way as the first as the West Londoners continued to dominate on the Channel Island. Jordan Burns and James Cordy Redden made a break from a scrum and after being brought down short the visitors went through the phases which allowed Andrew Durutalo to bundle over for try number six. The conversion came back off the post but the Trailfinders were flying with some of their best rugby of the season.

It continued to get better for Ward’s side, who got try number seven on the hour mark to bring up 40 points. Lewis Jones intercepted and offloaded to Burns but he was brought down, however a smart pop up to Murphy saw the move progress. The flanker was tackled but his offload to Pat Howard meant that the centre marked his return to the match day squad with a deserved try. Willis converted as the lead kept growing.

Jersey got a consolation try with 10 minutes remaining as Jake Upfield crossed from close range. They had the ball deep in the 22 and went through the phases before the substitute managed to navigate his way to the line. Penberthy converted to cut the deficit to 14-45.

The Trailfinders closed out the remaining minutes and smashed the ball in to the stands to confirm a stunning win in hugely impressive fashion.