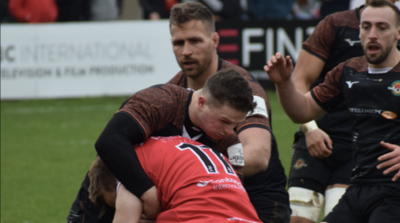 Ealing Trailfinders headed over to the Channel Islands on Saturday afternoon, fighting through Storm Eunice to pick up a vital win on the road in their quest to lift the Championship trophy at the end of the season.

In a whirlwind opening to the game, Jersey’s kick-off hit into the wind found touch, a Trailfinders scrum would follow, and a huge first set-piece saw the men in black and orange win the penalty. Craig Willis stepped up with his first kick of the game to put the away side 3 points up with less than 2 minutes on the clock.

Ten minutes later, the lead was doubled, once again points added through the boot of Willis, Jersey this time penalised for not rolling away at the halfway line.

With Trailfinders looking to use the first half advantage of the strong wind behind their back, chances came and went, but the momentum was growing.

That was until Jersey managed to work their way upfield and into a position to go for the corner for the first time of the game. After two attempts, Reds Prop Roy Godfrey finally dotted down within the rolling maul from the lineout.

The travelling side were soon piling the pressure back on, though, when from the restart, Jersey fumbled the ball into touch, allowing Trailfinders a free shot at a line out at their 22 metre. Jersey would subsequently concede a penalty at the breakdown allowing Willis to make it three from three and extend the visitors lead.

The islanders would have the final say of the first half, though, when whilst trying to exit the backfield, Craig Hampson’s pass to David Johnston was intercepted by Jordon Holgate, who raced away to score his sides second try and gain a narrow lead going into the break.

The start of the second half saw Trailfinders rejuvenate their dominance. Making the most of an overshot box kick, the visitors would go onto win a penalty at the scrum, allowing Willis to kick for the posts once again, getting his side back in the lead just minutes in.

Trailfinders dominance was clear to be seen, and it was rewarded once again when another penalty was won at the scrum; Willis would kick to the corner again this time with the forwards followed by the backs getting the ball over the whitewash for Jan-Henning Campher to dot down for the men in black and orange's first try of the afternoon. Willis once more good with the boot to add the extras.

In what was a nervy next twenty minutes, both sides makde big tackles to push each other back, but with no points to show for their efforts.

That was until the 76th minute when another forced error by the Trailfinders attack left Willis to knock another 3 points on the board and all but seal the game.