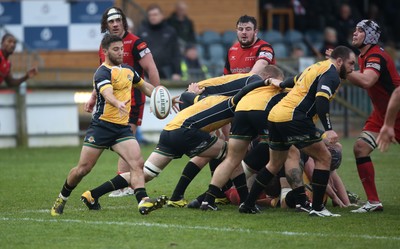 Ealing Trailfinders made it two wins in a row with a very impressive 31-7 victory over Hartpury at College Stadium.

Ben Ward’s side scored five tries and showed their class with a strong second half performance which proved too much for the hosts to deal with as the West Londoners left with a bonus point win.

A double from Alun Walker as well as scores from Barney Maddison, Harry Casson and Dan Temm ensured that the Trailfinders ended the second block of the Greene King IPA Championship with a morale-boosting away victory.

It was the hosts that started strongly and they went in front with a try from Will Tanner after just nine minutes. A lineout inside the 22 gave them the field position and with the rolling maul powering towards the line, Tanner was able to bundle over to score the opening points of the match. The conversion from James Williams extended their lead to 7-0.

The Trailfinders suddenly woke up and responded straight away with a try of their own from Barney Maddison. A string of penalties took them up to the line, and despite the maul being brought down Alun Walker smartly popped the ball up from the ground which allowed Maddison to smash his way over from just two metres out. Luke Daniels, who continued his impressive form from the tee levelled the scores at 7-7.

For the remainder of the first half both sides were battling for territory in what was a very close encounter. With the conditions making running rugby a challenge the teams were relying on a kicking game to create opportunities.

Piers O’Conor went close for the visitors with some nice footwork seeing him evade the defenders at the base of a ruck, but after racing in to the 22 he was dragged in to touch by the battling Hartpury defence.

Williams missed the chance to put the hosts ahead with a long-range penalty which went to the right of the posts, and the West Londoners punished the error with a try on the brink of half time to go down the tunnel with the lead.

In the final play of the half Luke Carter dummied and was brought down within touching distance of the line, and it allowed former Hartpury man Harry Casson to gather from the ruck and power his way over to give the visitors a much-needed lift. Daniels converted, giving Ben Ward’s men a hard-fought 14-7 advantage at the break.

The Trailfinders got the second half off to the perfect start with a try from Alun Walker just two minutes in to the final 40. Rayn Smid powered through the middle of the Hartpury defence, and the ball was spun wide straight away allowing Walker to run in unattended. Daniels converted from the touchline to extend the lead to 21-7.

Ealing then went in search of the bonus point score and were left frustrated as a number of chances passed them by around the hour mark. A dummy from Walker set Luke Carter free down the wing, but his pass back outside towards Will Harries was fumbled and Hartpury survived.

The patience paid off with 65 minutes on the clock as Alun Walker went over for the bonus point score to ensure that his side would return with all five points. A penalty gave the visitors a lineout just five metres from the line, and as so often this season it was the Scot who was able to power over the line from close range.

Dan Temm added some gloss to the scoreline with 10 minutes remaining with a long range try to put the match beyond doubt. The flanker gathered the ball from the base of a ruck 45 metres from the tryline and went himself, stepping a number of defenders to race clear for try number five.

The game opened up in the final moments with both sides looking to add to their tallies but the Trailfinders’ defence held firm and limited Hartpury to just the solitary try, which ensured that the match would finish with a 31-7 victory for the Londoners ahead of the return of the British and Irish Cup next weekend.