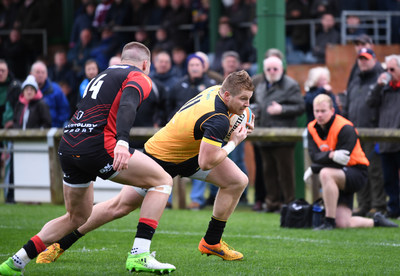 The West Londoners scored four tries in tricky conditions with James Cordy Redden, Guy Armitage, Seb Stegmann and Pat Howard all crossing the line to secure the win despite a late comeback from the hosts which led to a grandstand finish.

In the wet and windy West Country the opening stages to the game were challenging for both sides as a number of knock ons stopped either team getting any form of momentum. The first points of the match came courtesy of Sam Leeming who kicked Hartpury in to a 3-0 lead from a penalty.

The Trailfinders then began to show glimpses of their early season form and had their first chance when hooker Matt Cornish carried strongly deep in to the Hartpury 22, and despite being over the line the referee said he was held up and the game re-started with a scrum.

From the resulting scrum Ben Ward’s men scored their first try of the match to take the lead. Pat Howard took the ball up to the line and then after quick ball Craig Willis fizzed a wide pass to James Cordy Redden who dived over in the corner. Peter Lydon converted from the touchline to give his side a four point advantage on the 20 minute mark.

That lead was quickly extended as Guy Armitage scored the second try just three minutes later to put the Trailfinders in control. Willis had the ball deep in the opposition’s 22, and his perfectly measured grubber kick went straight through the middle of the Hartpury defence and popped up to Armitage who was able to pounce on the ball. Lydon again converted to put the Green and Whites 11 points in front.

The rest of the first half continued to be a real arm wrestle, and the final play of the opening 40 minutes was a second penalty for Hartpury fly-half Sam Leeming who cut the deficit at the break to eight points.

The first score of the second half was always going to determine the outcome of the match, and the Trailfinders came within inches of scoring straight from kick off. Ben Landry gathered the restart and dummied his way straight through a handful of defenders before the final pass was fumbled to see the chance pass by.

Seb Stegmann then scored the third try to put the Trailfinders further in front with half an hour remaining. A penalty was kicked to touch and the ball came off the top of the lineout to Peter Lydon who picked an impressive line before drawing in the final defender and allowing Stegmann a free run to the line.

Hartpury then responded with a try from James Dun to bring themselves back in to the match. They relied on their impressive driving maul to get momentum, and James Dun drove over from close range to cut the deficit to eight points.

The Trailfinders then got the bonus point try on the hour mark courtesy of Pat Howard. A five metre scrum gave them the platform, and the ball was spun straight to the South African who smashed his way under the posts. Lydon’s conversion put the Trailfinders 26-11 ahead, before a penalty followed five minutes later to extend the lead to 18 points.

However in similar fashion to recent weeks, the opponents rallied to make for a dramatic ending. Rayn Smid was sent to the sin bin and from the resulting phase Jake Henry scored in the corner, before a touchline conversion gave the hosts some momentum in the final 10 minutes.

Lydon then kicked another penalty to seemingly put the result beyond doubt, but another try for Hartpury followed from James Stephenson after a break through the middle to cut the gap to just seven points with three minutes remaining.

Ben Ward’s men then went through the phases to calmly close out the game, with Craig Willis smashing the ball in to touch to secure a fifth consecutive victory.