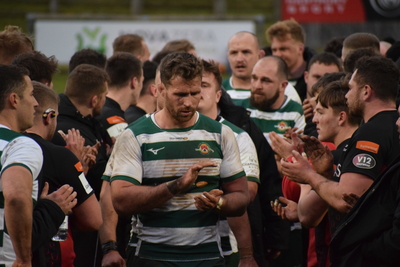 Ealing Trailfinders retained their winning run on Saturday afternoon in a thrilling win on the road at The Alpas Arena, facing a Hartpury side who went into the game on a six-game unbeaten run of their own.

It was the West Londoners who started the quickest, putting intense pressure on Hartpury early on. Before they knew it, the men in green and white were knocking on the door just a matter of minutes into the game. A kick to the corner after winning a penalty left them within Hartpury’s 5 metre. Drive after drive would follow from the forwards, only for Rayn Smid to power over to open the scoring, Craig Willis adding the extras with the boot.

It was to be a tough start to proceedings for the home side, who, with just seven minutes on the clock, were under their own sticks once again, this time Trailfinders Bobby de Wee the one to punish their ill-discipline. The lock making the most of possession within Hartpury’s red zone.

The in-form home side looked shell shocked at what they were hit by from their visitors, and the dominating first 10 minutes was added to just moments later. It was three tries in 15 minutes for Trailfinders as a quick ball from Craig Hampson found Angus Kernohan unmarked, the Irish Centre breaking through the Hartpury line offloading to Lewis Thiede, who would jog over the whitewash to give his side a healthy lead midway through the first half.

Hartpury, to their credit, would fight back and within moments had their first spell of sustained pressure within Ealing’s 22. For what felt like an eternity, they earned multiple penalties and attempted to go for the try line, however time and time again, they were held up, not able to score points for all of their possession.

The ten minutes of pressure would lead to nothing when at an awarded penalty scrum, Trailfinders would show strength across the pack to win a penalty of their own, Willis clearing to touch and relieve pressure.

With the momentum swinger, the West Londoners would once again turn the screw, setting up camp inside Hartpury’s half; Cian Kelleher’s line saw him break free offloading to former Hartpury College Lock Simon Linsell who bounded over the try line to score and bring up the bonus-point for the league leaders, with just over 30 minutes on the clock, Willis making it four from four with the boot.

Hartpury would have the last say infirst half proceedings, finally making the most of a period of ball inside Trailfinders half, they were awarded a penalty, kicking to the corner, Ethan Hunt would be one who would put the home sides first points on the board, James Williams adding the conversion.

In a first half dominated by the visitors, the home side carried their momentum from that last-minute try into the second half. In a tight opening to proceedings, the West Country side would spend more time in the red zone, but without avail. That was until the 64th minute when some quick thinking by Hartpury Scrum-Half Toby Venner saw him close down Craig Hampson, stripping the ball off of his opposite number, who showed a clean pair of heals to the chasing Trailfinders defence to race home and close the gap to a two-score game.

Hartpury would continue to try and cut the gap between themselves and the league leaders, but just moments later, further good work from Trailfinders at the break down would see them win a penalty, Willis kicking to touch, and the forwards doing the rest, Max Northcote-Green the one getting on the scoresheet to all but seal the game.

A gritty performance away from home once again from the West Londoners, with a bonus-point victory in the bag, they’ll head back along the M4 with smiles on their faces tonight.