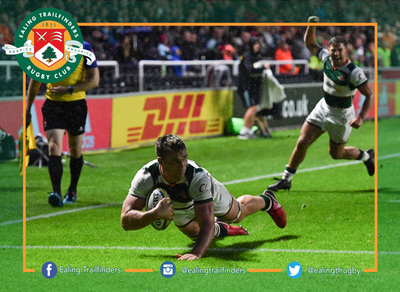 Ealing Trailfinders produced a hugely impressive performance and will take a huge amount of positives from what eventually ended in a 22-8 defeat to Harlequins at the Twickenham Stoop.

In atrocious conditions Ben Ward’s men gave an outstanding account of themselves, and with some more clinical finishing they may well have left with a different result.

The West Londoners dominated the opening exchanges and saw plenty of possession as they took the game to the hosts. Captain Sam Dickinson smashed his way through a number of defenders to take his side up towards the try-line in the first five minutes but a turnover saw Quins escape.

The clinical hosts then took the lead on the 10 minute mark courtesy of a try from Luke Wallace. Quins had a number of phases in the 22, and with an overlap on the left wing they spun the ball wide to the flanker who scored in the corner.

For the remainder of the first half it was Ben Ward’s men who enjoyed most of the ball as they continued to show an impressive account of themselves.

A penalty at scrum-time allowed Dave Johnston to cut the deficit to just two points by dissecting the posts with his left foot, and then a huge moment saw the Trailfinders take the lead before play was brought back for an earlier infringement.

From the top of a lineout Seb Stegmann went flying through the middle and raced under the posts from outside the 22, but the referee blew up for crossing and the chance went missing. Johnston then had another penalty opportunity but in the wet conditions the kick flashed wide of the posts.

In the final moments of the first half Quins then extended their lead with a try from Joe Marler. A number of penalties took them up to the try-line, and the England prop then bundled over from close range. Smith converted to put his side 12-3 up at the break after a fiercely competitive opening 40 minutes.

The Trailfinders then continued in the same style in the second half but the heavens had well and truly opened making running rugby almost impossible, however an early chance saw Ollie Stedman break through the line before a knock on gave Quins a scrum.

Penalty after penalty then took the Trailfinders up to the Quins try-line, and after Stan South was sent to the sin bin Ben Ward’s men finally got their reward. With the rolling maul powering towards the line Rayn Smid broke away to dive over in the corner, cutting the deficit to just four points.

Marcus Smith moved the lead back up to seven with a penalty, but still the visitors were enjoying the majority of the ball as they looked to level the score.

Quins then broke away with just 10 minutes left to give them control of the match. After a five metre scrum they got a free kick, and Renaldo Bothma took it quickly before smashing his way to the line. Lang’s conversion put them 14 points ahead with time running out.

The Trailinders refused to give up and with the game becoming more open there were chances for both sides but the match ended with a narrow defeat but plenty of positives ahead of next weekend’s Greene King IPA Championship opener.