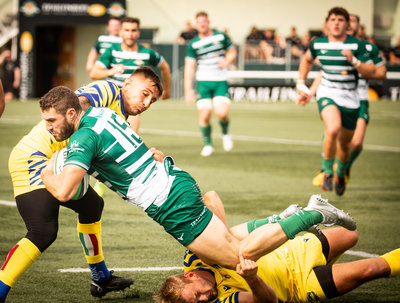 In their first run out at home and their fourth and final preseason game, Trailfinders were looking to put in a strong performance ahead of the season opener against Doncaster Knights next weekend (buy tickets here).

Despite the big scoreline, the game took sometime to spark into life. Jonah Holmes and Craig Hampson in particular made good breaks early on with Zebre also reciprocating, but both sides failed to convert these chances into points.

On the 20th minute, the deadlock was finally broken as Zebre dotted down in the corner following an overlap and efficient build up play. The conversion from the touchline sailed wide and it was a five-point game.

It didn’t take long for the hosts to respond. After forcing a penalty in the midfield, Craig Willis kicked to touch and bought up the lineout 10 metres out. A strong rolling maul saw the Green and Whites slowly edge closer and after being told to use it, Hampson darted through a gap for the first home score of the season at Vallis Way. Willis added the extras and Ealing were 7-5 in front.

Despite the efforts of both sides, neither were able to score again and so we went into the break ahead, Ealing Trailfinders 7-5 Zebre Parma.

After the half-time oranges, the hosts came out of the traps fast in the second 40 and it only took three minutes to cross over the line. A beautiful move released Hampson down the blindside, who put Luke Daniels over in the corner. Extras were added by Willis, 14-5.

Zebre then responded less than five minutes later, making it inside 10 metres of the line and then slowly picking and going before dotting down and making it 14-12.

From here the game could have gone one of two ways, a tight nervy arm wrestle or a strong, confident display. Ealing chose the later!

The West-Londoners rolling maul begun to dominate and whenever the visitors infringed, the kick to the corner saw them pay. This happened on the 50th minute as a huge maul saw the hosts march 15 metres up field and come within five metres of the line. Rayn Smid then broke off the back and passed inside to allow Bobby De Wee to bundle over.

Then Jan-Henning Campher got in on the act after getting an armchair ride to the try-line on the back of another dominant maul. Both scores were impressively converted by Steven Shingler from the touchline.

With ten to go, a scrum in midfield allowed Jack Grant to put Reuben Bird-Tulloch through a hole. The centre then sidestepped the fullback to dot down under the sticks.

Then with the full-time whistle approaching, Campher made a superb break to to allow Bird-Tulloch to stroll in for his second score of the afternoon.

Impressively the Trailfinders slotted all six of their kicks and showed their quality against a side who are in a league higher than them. Their strong showing was matched by the vocal home crowd and it tees up the squad well ahead of next weekend’s tough test against Doncaster Knights in the Championship opener. If you haven’t already, buy your tickets for the game here.