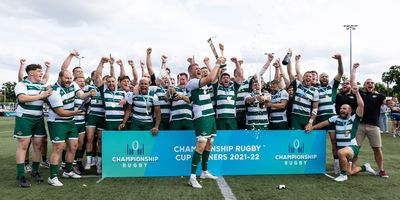 Ealing Trailfinders secured the Championship Cup title after a victory against Coventry at Trailfinders Sports Club.

Tensions were high at Vallis Way and that was reflected on the field in a cagey opening few minutes. Steven Shingler scored the first points of the match as he converted a penalty from in-front of the posts.

It didn’t take long for Coventry to hit back. Ealing Trailfinders tried to work the ball wide from a line-out, however after some loose handling Coventry managed to pick the ball off the ground, it was passed to Josh Barton who ran in from fifty metres.

Midway through the first half, Reuben Bird-Tulloch made an exceptional break, leaving the Coventry defence behind him, he was brought down in the 22 and the Coventry players illegally slowed the ball at the break down. This gave Shingler the opportunity to convert the penalty into points, and he did.

The away side thought they had scored their second try of the afternoon when they set up a line-out drive and spotted a gap down the blindside. However, the referee decided there was crossing after conferring with the touch judge, this allowed Ealing to clear their lines and relieve the pressure.

Coventry extended their lead just before half-time through the boot of Tony Fenner, giving them a four point advantage at the break.

Alex Rae’s men managed to pick up where they left off in the first half. Some great handling and offloads allowed them to break into Trailfinders’ 22 and they were awarded a penalty. Fenner once again converted from the tee. Ten minutes later, Shingler managed to close the gap back to four points with a penalty.

With twenty minutes to play, Bird-Tulloch was at it again, dancing through the Coventry defence to get Trailfinders within five metres of the try line. Ealing were awarded a penalty and Matt Gordon was stood over the ball ready for a tap and go. He managed to muscle his way over the line, scoring the first try of the afternoon for the West Londoners, Shingler adding the extras.

Ealing managed to get one hand on the trophy when a penalty from Craig Willis extended their lead to six points with just seven minutes to play at Trailfinders Sports Club.

It was a nerve-racking ending for the home fans fans as Coventry were awarded a penalty when the clock was in red. They needed seven points to win the game, so had to kick towards the corner. Great maul defence from the home side meant Coventry had to use and Ealing won a penalty for holding on at the breakdown.

This completed a historic league and cup double for Ealing Trailfinders in their 150th year as a club.