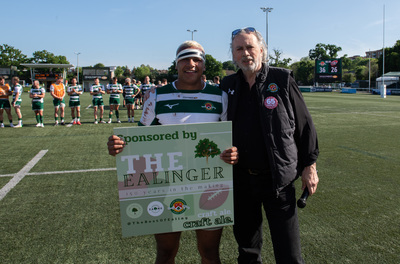 Man of the Match
Reuben Bird-Tulloch

Ealing Trailfinders secured their place in the Championship Rugby Cup Final after a victory against Cornish Pirates at Trailfinders Sports Club in the Semi-Final.

Both sides knew the importance of this fixture as it was not a two-legged match, unlike previous rounds in the cup competition. It was a cagey opening first quarter at Vallis Way, where neither side could really get a foot hold in the game.

Cam Terry scored the first try of the match, from a thirteen-man rolling maul, it worked against Ampthill last Saturday and worked against Cornish Pirates this weekend.

Pirates didn’t take long to hit back through Rus Tuima, the man on loan from Exeter Chiefs powered over from close range.

Ealing Trailfinders second try was almost identical to their first. Cam Terry came up with the ball once again after almost the whole team had joined the maul.

Reuben Bird-Tulloch played a big part in the home sides next try, he side stepped his opposite number to set up a two-on-one and popped the ball to David Johnston to score in the corner.

The clock was in red at the end of the first forty, but Trailfinders were not done yet. The ball was moved into midfield from a line-out. Jordan Burns was waiting back on the blindside at first receiver, he spotted a gap and burst through the defence to dot down for Ealing’s fourth try of the half.

Steven Shingler scored a penalty to extend Ealing Trailfinders’ lead at the start of the half, however Cornish Pirates came back firing.

Just three minutes later, Syd Blackmore crashed over from a rolling maul to give Pirates some hope. Then it was the turn of John Stevens to add himself to the scoresheet, the Pirates replacement scored from a pick and go after multiple phases on Trailfinders’ line.

George Davis won a scrum penalty for the home side which managed to halt Pirates’ momentum. Ealing Trailfinders took the quick tap and set up a rolling maul, however this time they couldn’t break over Pirates’ line. The ball was moved to the blindside where Steven Shingler created an overlap for Charlie Walker to dot down in the corner.

Pirates still would not lie down, Lewis Pearson scored their third try of the half. After multiple phases in midfield, the away side spotted an overlap on the right wing. The ball was worked out to the blindside flanker who cantered in from twenty metres.

Unfortunately for Cornish Pirates, their second half resurgence was not enough and it is Ealing Trailfinders who progress through to the final next weekend.