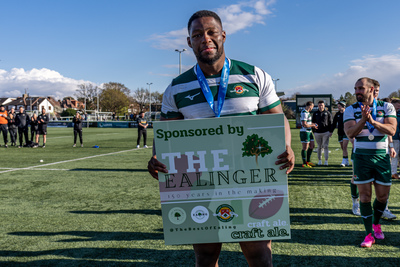 The biggest rivalries bring out the biggest occasions, and a Championship Rugby finale between Ealing Trailfinders and Richmond with the men in green and white looking to lift their first Championship title, was the perfect latest instalment in this local clash.

Trailfinders went into the game knowing that a win or bonus-point draw would see them crowned champions, and the home side got off to the perfect start winning a penalty from the scrum at Richmond’s 10 metre. Willis kicked to the corner and the forward did the rest of the work with Simon Uzokwe firing his way over.

Moments later another strong scrum from Trailfinders saw Richmond once again penalised, a dominant opening few minutes for the men of Vallis Way.

Penalty after penalty came for the home side and midway through the first half Uzokwe would power his way over the line to score his second of the tie.

The start of the game was just what Trailfinders would have been looking for, showing great physicality to fire out of the blocks.

23 minutes on the clock and the third try was up for the home side, with a scrum at Richmond’s 5 metre, Craig Hampson with the show and go glided over the try line to score.

You’d think the Trailfinders might stop to take a breath, but just a matter of minutes later link play between Luke Daniels and Max Bodilly saw the Cornishman skip over for the bonus-point score.

Richmond weren't going to go down without a fight though as at the half an hour mark club Captain and former Trailfinders Mark Bright scored on his 201st Championship appearance for his side's first points of the afternoon.

It was a fifth by half-time with a great break by George Davis saw the ball recycled back for Rayn Smid to dot down for his sixteenth try of the campaign.

5 minutes into the second half and Trailfinders were back to their firing ways, Hampson feeding in Bodilly for his fifth try of the season.

Another forced error ten minutes later saw replacement Steven Shingler able to put the forwards in a great position to add to their lead, the line out running smoothly the ball was offloaded to Uzokwe completing his hat-trick mid-way through the second half.

With just over 10 minutes left on the clock, Trailfinders were once again deep inside the Richmond half. Great hands across the backline say Luke Daniels fed in on the wing after a lovely tip on by David Johnston to score.

There was still time for another score when another stripped ball saw the men in green and white go on the rampage once again, great handling from replacement Jack Digby saw Reuben Bird-Tulloch go through, being tackled he offloaded for Angus Kernohan to scoop up the ball and score.

Kernohan was soon at the double just moments later, once again put into space in the corner beating his man to dot down.

Richmond would have the last say, but it was to be only a consolation as their rolling maul finally got them their second of the game.

A result that will go down in the Ealing Trailfinders history books, victory today meaning that the club lifted it’s first ever Championship Rugby trophy. A momentus moment for all involved with the club, we can’t thank you enough for your fantastic support.