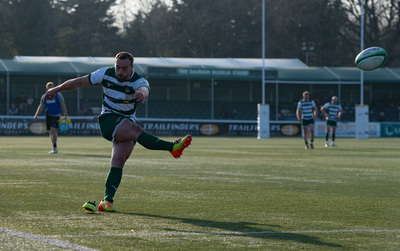 Cornish Pirates were in town for the rescheduled Championship Rugby Round 14 clash on Saturday afternoon, a game which would see second place face third with just two games of the season remaining.

Both sides went into the game knowing that winning both remaining games would see them crowned champions.

The game started in an expected fast fashion, with both sides looking to make their mark early on; Trailfinders were applying pressure just moments into the game; however, a turnover by Pirates winning the ball at the breakdown, allowed them to clear to touch and relieve pressure inside their half.

The pressure continued to come though, and before they knew it, a penalty was won by the home side as the ball was knocked forwards by Pirates at their 10 metre. Craig Willis decided to go for the posts looking for points and was successful with his kick to take an early lead.

A quarter of an hour down, and Trailfinders would have their first score of the game, after Craig Hampson managed to find space, racing away in a two on one. He went onto feed in Bobby de Wee, who raced home to score the first try of the afternoon. Willis adding the extras through the boot.

Just moments later, a big scrum by the Trailfinders pack, after Pirates had won a scrum just inside the Trailfinders half, saw Willis kicked to touch from the penalty, deep inside the Pirates 22; after some forceful work by the forwards, Craig Hampson picked up the ball with some more great footwork to weave his way through the Pirates defence to dot down.

Midway through the half, the men in green and white would extend their lead once again. As the forwards went through the phases, the ball was worked back to Willis, who sent a looping pass over to Max Bodilly, who in acres of space sprints home to score.

Just over half an hour was on the clock, and the bonus point was secured. Another well-worked move saw Jan-Henning Campher put through; bouncing off his tackler, he powered his way over the try line. Willis making it five from five with the boot.

In what was a forceful first-half display by Trailfinders, Pirates looked shellshocked but did however manage to get points of their own on the board, when in the last play of the half made the most of a loose ball they won a penalty. Kicking to the corner the forwards did the rest and the rolling maul saw Tom Channon over the line.

Another half in the sunshine lay in wait as Pirates kick-off was spilt forward by Trailfinders. Pirates had earnt a scrum just inside Trailfinders 22, and after going through the phases to make it inside Trailfinders 5 metre, they worked the ball wide as Robin Wedlake was found in space on the wing to dot down.

Trailfinders would halt the attack moments later, Craig Willis knocking over a penalty after he won the advantage at the breakdown.

Moments later, and it was Willis who would prove a key cog in the Trailfinders wheel once again, as looking to open the field he launched the ball over to Angus Kernohan who rode his tackler to get over the line.

Late Pirates tries from Syd Blackmore and Carwyn Penny gave the away side hope; however another late penalty from Craig Willis was to all but killed the game.

The final moments were made up of almost moments for both sides, but in the end, it would be Ealing Trailfinders who took the win, in a key fixture in their campaign.

20 Simon Linsell – Geoff and the back row