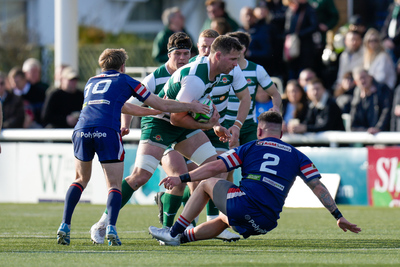 Ealing Trailfinders returned home to Vallis Way on Saturday afternoon, a week on from victory away at Jersey Reds.

Doncaster Knights were the visitors in a top of the table clash at Trailfinders Sports Club; as two of the most in-form sides in the league met in a mouth-watering clash in West London.

The men in green and white looked to start the game strongly and get the home crowd behind them. The opening minutes saw a kicking battle which led to Doncaster winning a penalty due to Trailfinders being deemed to have been in front of the kicker. Knights fly-half Sam Olver kicked to the corner as the Doncaster forwards looked to make the most of territory inside Trailfinders 22. It wasn’t to be though as Trailfinders pack held up the attack, ultimately winning a scrum at their own 5 metre.

A big scrum from the Trailfinders pack followed, and Craig Willis could clear upfield to get his side back up the pitch.

With the opening ten minutes played inside Trailfinders half, Doncaster knocked on the door time and time again. But it was at the fourth time of asking inside the red zone, which saw the ball was worked out to Sam Olver, who kicked the ball into space for Maliq Holden to collect and score, Olver himself adding the extras.

Trailfinders would hit straight back, and moments later, they would have the opportunity to attack themselves. Willis kicked to the corner, but the line out couldn’t be held; as the ball was knocked backwards, Doncaster would retrieve possession, winning a penalty to allow them to clear to touch and relieve pressure.

Midway through the first half, David Johnston got the home side's first points of the afternoon, with advantage in hand, Craig Hampson kicked the ball to space on the right wing finding Johnston, who acrobatically caught the ball and dotted down.

Moments later, Doncaster were on the attack once again, and after winning advantage at Trailfinders 22, Olver would attempt a drop goal; the ball sailed narrowly wide; however, the referee went back for the penalty for Olver to knock over, extending Doncaster’s lead with ten minutes of the first half to come.

Just minutes left of the first period and with Trailfinders down to 14 men through a yellow shown to Rayn Smid for a knock-on, Trailfinders were caught offside at their 5 metre. Doncaster went through the phases through dominant carries before working it out wide again to Holden. The winger diving down to score in the corner, with Olver once again converting.

Just moments into the opening exchanges of the second half, Kyle Evans was shown a yellow for knocking the ball on when Trailfinders looked to be on the wing, an almost identical incident to that of Smid’s in the first half.

Looking to take advantage of that, Johnston would feed the ball out to Luke Daniels in a slick move that saw Trailfinders enter the Doncaster 22. The men in green and white would go onto work across the field before Max Bodilly sent a looping ball over to the left wing for Daniels, who unopposed raced home to score his side's second try of the afternoon and see just 5 points between the two teams.

Doncaster would soon hit back and win a penalty at the breakdown after an overthrown lineout saw Trailfinders Lock Bobby De Wee isolated. Olver was once again successful with the boot just inside the Trailfinders half, to extend the travelling sides lead.

Chances came and went for Trailfinders, as they looked to be in once again when a great offload from Willis put Daniels into space; however, the Doncaster defence fought back and soaked up the pressure.

Trailfinders looked to breakthrough midway through the half when replacement Cian Kelleher was found on the wing; as he looked to offload inside to Bodilly, he was held back, and with that, momentum had gone, allowing Doncaster to battle back and defend the breakdown.

Big games lead to big moments, crunching tackle after crunching tackle saw Jan-Henning Campher over the ball, winning a penalty at the break down at Trailfinders own 22, to once again put the home side on the front foot.

The momentum was beginning to build the crowd’s noise, and just minutes later, Rayn Smid was able to dot down, Craig Hampson feeding the ball to the back-rower, who powered his way over in the corner.

With the game in the balance and only three points between the two sides, some quick thinking by Doncaster’s Bill McBryde saw him intercept the ball at his own 22. The racing Trailfinders defence of Hampson and Bodilly couldn’t catch the full-back, who scored to open up a bigger lead for the visitors with less than three minutes to go.

In what was to be the last action of the game, Willis kicked for the posts after his side won a penalty at the breakdown, looking for a losing bonus-point his sweetly struck kick hit the left upright. The ball stayed in play, allowing Doncaster to work through two phases and finally clear to touch and confirm the win.

1. Will Davis – The Green Army