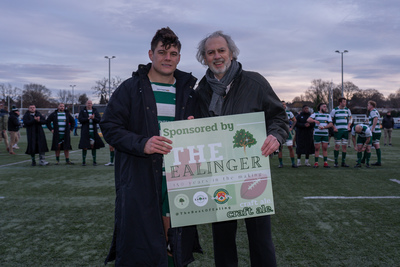 Man of the Match
Jan-Henning Campher

Bedford Blues inflicted a first home loss of Ealing Trailfinders season on Saturday afternoon, as Mike Rayer’s side ran out 19-31 victors in Round 17 in West London.

It was the Trailfinders who struck first early on, a 50:22 won after a great nudge through from Craig Hampson, saw the men in green and white enter the blues twenty-two looking for points. After some forceful forward work, the ball was played out to Simon Linsell, who, just managing to juggle the ball, kept hold of it, his momentum seeing him bundle over the line to score in consecutive games. Steven Shingler stepping up to add the extras with the boot.

Almost immediately, Bedford would strike back though, their own pressure seeing them camp inside the Trailfinders 22. The ball was worked along the backs for Matt Worley to score on the overlap. In what would prove to be an open first half, both sides seemed adamant it would be them who put their stamp on the game.

The end to end action was to return just minutes later when Jan-Henning Campher worked off the back of the rolling maul to run through unopposed, getting the home side back in front.

The next ten minutes would see Bedford hit back again, earning a number of penalties; however, the Trailfinders defence held firm until the thirty second minute when a line out saw them work the ball well out wide, Ollie Newman getting the visitors back within just two points going into half time.

After what was a busy first half of rugby, Bedford would continue their momentum with them going into the opening period of the second half.

Their possession was rewarded moments later when Prop Danny Hobbs-Awoyemi broke off the back of the maul, running down the blindside to score and put Bedford in front for the first time in the tie.

Continuing to apply the pressure, the visitors would win another penalty. Kicking to the corner once again, this time it was Hooker Jack Hughes who would dot down to extend the blues lead going into the heart of the second half.

Trailfinders weren’t going to lie down, though, and they were soon back within a score when a well-worked move from a driving maul, saw Matt Gordon power home to give his side hope of a second-half comeback, in what was the Centre’s first game back since facing Bedford away in November.

However it wasn’t to be for Trailfinders as with less than 10 minutes on the clock, Bedford would strike again; once again, a line out worked down well saw the ball worked out wide to Jamie Elliot to put breathing room between the visitors and hosts.