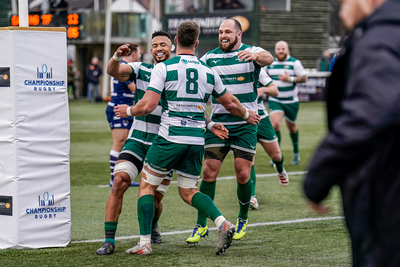 Ealing Trailfinders made in four wins from four on Saturday afternoon, as they kicked off the New Year in style, in the clubs first run out at Trailfinders Sports Club in over a month.

Tries from Alun Walker, Cian Kelleher, Shaun Malton, along with a brace from Back-Row pairing Rayn Smid and Simon Uzokwe, securing the bonus-point victory to see the men of West London return to the top of the table.

The Trailfinders started just how they finished in Nottingham a week ago, firing into action with the forward pack picking and going to see Rayn Smid dot down for his first game. Just the start that Ben Ward and his coaching team were looking for, with Craig Willis adding the extras from the boot.

With just 11 minutes on the clock, the home side were over the whitewash once again as Coventry were penalised by the referee inside their half. Willis would go on to kick to the corner, Walker with the precise dart from the touchline, joining onto the rolling maul as he dotted down for the third time in two weeks.

Coventry had held their own territorially; however, it wasn’t until the sixteenth minute that they had points to show for their efforts. After Ealing Trailfinders were penalised by the referee at the breakdown, the ball was kicked to the corner, the line out resulting in metres gained, only for the ball to be worked out to Winger Rob Knox who beat Kernohan to dot down in the corner.

It was to be Coventry’s only score of the afternoon but one that gave them a glimmer of hope in a tough first half for the visitors.

Just moments later, it would be Trailfinders who would get on the scoreboard next, once again Smid getting on the scoresheet. After a weaving run by Trailfinders full-back, David Johnston led to a quick ball from scrum-half Craig Hampson who found a stampeding Smid who's line saw his power home dotting down with ease.

The bonus-point was then wrapped up before the break, after a quick ball flung by Craig Willis out to Angus Kernohan, who met the ball with speed as he broke free of his tackler, with only one man to beat, he saw Kelleher on his inside, collecting the ball he was home and dry home for the fourth try of the afternoon.

Looking to put clear daylight between themselves and the Midlands side. Just a minute passed when in-form Uzokwe was found in space; after a break from Max Bodilly saw him muscle his way over the line to dot down.

Just two minutes later, Uzokwe would be in again; this time, a line break from Smid saw him feeding the ball over two Coventry heads to see Uzokwe run in from 22. Willis adding the extras once again.

Midway through the second-half Ealing looked like they were in for another as the ball was dropped by Coventry inside Trailfinders 22; Burns worked it wide to Kernohan, who fed the ball back inside to Burns racing up the field, once again back to Kernohan, who was taken down to stop the attack.

Replacement Hooker Shaun Malton would have the last say though, with just moments left in the fixture his own line out was worked down, and the backs joined in to bundle over the South African to score.

Another convincing home win for the men in green and white, as they returned to the top of the pile in the Championship Rugby table.

1. Will Davis – Sponsored by Green Army