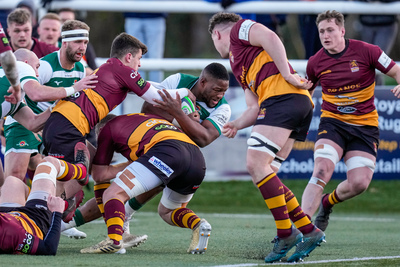 Ealing Trailfinders returned to winning ways on Saturday afternoon as they ran out 54-17 victors at Vallis Way.

The West Londoners went into the game looking to bounce back from a Round 9 defeat last time out at Doncaster, and they exploded back to victory at Trailfinders Sports Club.

It was the visitors who got the scoreboard ticking first after winning a penalty just inside the Ealing Trailfinders half, with Bennett knocking over the kick to get Ampthill off the mark.

Just under a quarter of the way through the game, Trailfinders were firing when a strong scrum from the pack saw the ball fed back to Simon Uzokwe, who powered through his tacklers to dot down for Trailfinders first try of the game, Craig Willis adding the extras with the boot.

Moments later, Ealing Trailfinders would go on to extend their lead when some quick hands from the home sides backs put Luke Daniels away on the wing as he found space to race away to dot down.

Ben Ward’s men were up and running, with Ampthill looking shellshocked by the quick double hit just two minutes apart.

Next up was a chance for always in form Centre Max Bodilly to get in on the action; a line out from Jan-Henning Campher worked along the backs to allow Bodilly to break through the line scoring his sides third try of the game.

The bonus point was wrapped up and in the bag before the half an hour mark, when Craig Willis found Max Northcote-Green on the wing in space with the back-row racing along the line to score his first Championship Rugby try of the season.

With Trailfinders running away with proceedings, Ampthill were once again penalised for an illegal tackle on Uzokwe, as tempers flared up a composed Willis would kick to the corner once again, this time for starting debutant Len Massyn to score his first try for the club.

There was still time for more in the first half, and a tough Ampthill defence was once again broken by Bodilly, who, after an impressive line break from Campher, was fed the ball to dot down for his second of the game.

After a chance for a breather and a quick team talk, both teams returned to the field of play with Ampthill looking to stop the bleeding in a game in which the result looked to be beyond doubt.

The visitors came out fighting however and got their first try of the game when a clever grubber in behind Ealing’s defence saw the ball recovered and them bundling the ball down under the Trailfinders posts just five minutes into the second period.

Trailfinders would soon hit back once again, though when just 5 minutes later, a line break by Max Northcote-Green got the home side just metres from the line, the ball worked out wide to Cian Kelleher to dot down for his first Ealing Trailfinders Championship try.

In what was a polar opposite half to the first half, Ampthill once again struck back with a break off the driving maul allowing the visitors to dot down for the second time.

In what was becoming an end to end the second period, and with just minutes left in the game, Kelleher was put in to score once again. Luke Daniels being found in space on the wing, feeding the ball back to the Irishman to seal an impressive 54-17 victory for the men in green and white.