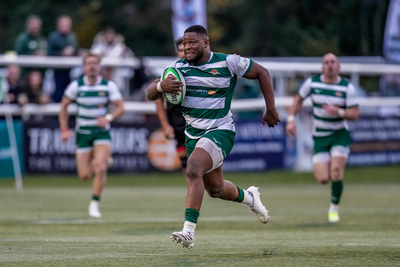 The West Londoners headed into Round 8 top of the table, with Harvey Biljon’s men alongside Cornish Pirates snapping at the heels of Ben Ward’s side. The Championship Rugby season has seen a lot of close encounters over the opening rounds, and this was to be no different with two of the league’s most in-form sides going head-to-head at Trailfinders Sports Club.

It was Jersey who started the more vigorous, and with a sustained period of attack within Trailfinders 22, Sam Leeming decided to go for the posts, putting the first points on the board for the visitors.

Moments later, Trailfinders found space in behind Jersey’s backline and got within the 22; several drives from the West Londoners forwards saw Craig Hampson shift the ball back to Steven Shingler, who muscled his way over the line to dot down for the home sides first try of the afternoon, converting his own score.

In what was a hard-fought opening quarter of the game, Jersey quickly hit back again. Hard-hitting carries got the visitors within Trailfinders 22, the ball being knocked into touch as the islanders looked to drive the ball home from the line out. The subsequent line out was halted by Ben Ward’s men however, a darting run inside by Jersey Reds Captain Lewis Wynne saw him power through a gap in the Trailfinders defence, to score Jersey’s first try of the game and regain their lead.

Five minutes later the visitors extended their lead with multiple phases inside Trailfinders 22. This led to Steve Longwell eventually powering his way through the Ealing defence as the Reds led 7-15 mid-way through the first half.

Biljon’s men sure didn’t head to West London looking for anything but an upset at the league leaders’ home to end their unbeaten run at Vallis Way.

This would be a tough day at the office. Still, one that Trailfinders were more than up for, with just minutes left in the first half, a clever knock through from the boot of Shingler got Trailfinders within the 22, a knocked-on ball was then swooped up by Luke Daniels, to race along the wing and dot down to bring the game within a point going into the break.

The second half started with the same intensity as the first half, with both sides going to war once again.

This time it was Trailfinders who would strike first when a bright start to the half when they were rewarded with a penalty just inside Jersey’s half. Shingler was once again good with the boot kicked to the corner and the resulting line out from Shaun Malton was finished off at the back of the rolling maul by the Hooker who dotted down to put Ealing in the lead once again in the top of the table clash, with Shingler adding the extras.

However, in what was becoming an end-to-end affair, Jersey quickly hit back once again just a matter of minutes later when a dominant lineout drive from the visiting side saw the referee award a penalty try putting the Reds back in front with 25 minutes to go, Malton subsequently being sent to the sin bin.

The game was on a knife-edge, with both sides going into every collision with more and more intensity as the clash went on. It was going to be fine margins that would split these two sides, and when Simon Uzokwe read the Jersey attack intercepting the ball at the half-way line, he raced away to dot down in what proved a real momentum swinger, with the visitors looking to get a real foothold on the game.

In what proved to be a real swing in the game, and with 10 minutes left on the clock, Ben Ward’s men were able to extend their lead to over a score. Quick thinking from Trailfinders Scrum-Half Craig Hampson saw him show and go, darting inside to score what would prove to be the decisive try.

Shingler was once again successful with the boot, putting Trailfinders 13 points to the good going into the closing minutes of the game.

It wasn’t to be an easy final moment of the game for the men of Vallis Way though when with just two minutes left on the clock, a penalty won within Trailfinders half saw Jersey’s pack go through the motions and power home to put some final moments of pressure on what had been a tight top of the table affair.

The try proved too little too late however and a close-fought win for the West Londoners saw them hold on tightly to their top of the table status with Harvey Biljon’s men leaving Vallis Way with a hard-fought bonus point.