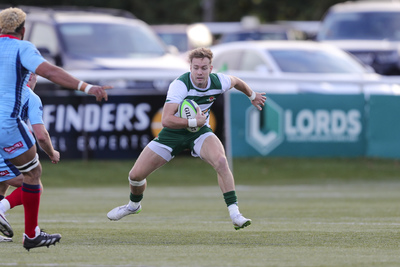 Ealing Trailfinders fastened their grip on first place in the Championship with another double-figure try return, with Matt Williams’ London Scottish falling to a 101-7 loss at Trailfinders Sports Club.

On a fine afternoon in West London, Trailfinders touched down 15 times for their biggest win of the season so far.

Despite the score, there were large portions of the first half where Scottish held their own and posed the question of scoring a try with prolonged periods in Trailfinders’ territory.

Nevertheless, the try bonus point was secured in the first half, with Jan-Henning Campher scoring a brace and Charlie Walker, Matt Gordon, Rayn Smid running in their own alongside a penalty try.

Campher completed his hat trick soon after the interval with an additional eight tries in the final fourty, including a Tadgh McElroy hat-trick, in what can only be best described as a forceful second half performance.

Trailfinders were put under immediate threat with the visitors winning several penalties, with Scottish firmly situated in the opposing ’22 in the opening stages.

Good work at the breakdown by Ben Ward’s side won back possession and relieved such pressure, with the breakthrough following soon after.

Craig Hampson and Charlie Walker revived their famous linkup to put the hosts in front, the scrum-half opting for a quick tap-and-go whilst shadowed by Walker to the try line to touch down.

A knock-on from Simon Uzokwe just short of the line denied the boys in Green and White their second of the afternoon, following some swift hands in the build up play.

This time it was Hampson who was denied so close to the whitewash, employing typical quick thinking and spotting a gap tin the Scottish back line to dot over from the ruck, only to fumble the ball.

A matter of minutes after Scottish re-entered Trailfinders territory following a risky kick and chase from a loose ball by Reuben Bird-Tulloch, the hosts were over again with half hour gone.

Steven Shingler kicked for touch with the following rolling maul involving all but two Trailfinders, as hooker Jan-Henning Campher dotted down with Shingler adding his second conversion of the afternoon.

In a half that was fraught with loose hands from Trailfinders, their industry on the ground won back possession several times and led to the third try.

Shingler once again opted for the corner the lengthen the distance between the sides, but it was the Exiles’ own ill-discipline that was adjudged to be preventing a score with a penalty try awarded.

Former Scot Matt Gordon that bagged his side’s try bonus point with his side just warming up in one of the final action of the first half, in his first start of the season.

Captain Rayn Smid peeled off the base of the scrum to offload to the centre, dashing from the halfway line to cross over with Shingler adding more extras.

It was indeed Trailfinders’ leading man in Smid to inflict more damage on the scoreboard next, receiving a smart offload from fellow countryman Bobby de Wee to cross the whitewash.

Shingler’s sumptuous kick from halfway found touch at the five metre line for Campher to grab his brace after yet another dominant rolling maul, with the Welshman’s conversion concluding proceedings for the first period.

Scottish acquiesced early possession of the ball and Trailfinders kicked for touch again, with Campher securing his hat trick three minutes into the second period but was replaced by debutant Tadgh McElroy soon after.

Exile Noah Ferdinand registered his side’s first return, touching down in the corner with Hayden Hyde assisting with a neat one-handed offload.

But it was replacement Jordan Burns who retorted by sniping through a break in the Scottish defence off the ruck, racing away uncontested to dot down with fellow half-back substitute Craig Willis adding the conversion.

Uzokwe’s work ethic in the ruck, alongside backchat from Scottish’s Rory Hughes, enabled Willis to kick for the corner with another double-figured maul attempting to crash over.

After several recycled phases with the ball, McElroy assumed the scoring nous of his hooker counterpart to touch down for his maiden five points as a Trailfinder.

It was rinse and repeat for Ward’s men with McElroy touching down for his brace off the back of another rolling maul- the fifth try for the matchup for a hooker.

Trailfinders mercenary attitude did not let up for a second- scoring from their first possession from the kick off with Gordon racing away on the left flank, working it inside initially to Burns and then again to Walker to score.

Scottish squandered what looked to be their final chance of reaching a double-figure score when a threatening maul was knocked on.

Luke Daniels capped off a positive first start of the season to take the Trailfinders total beyond 80 points with less than five minutes to go, the fluid attacking move spawning from Willis’ quick turn in midfield.

James Cordy-Redden moved the ball to Jack Digby for the latter’s first try in Green and White, with Reuben Bird-Tulloch drawing his side closer to 100 points with a try of his own.

Simon Uzokwe’s monster tackle directly forced a turnover in the Exiles’ ’22, with Gordon collecting and distributing to the ever-determined youngster to power home.

With the Vallis Way crowd desperate to see 100 points, it looked as though Digby was the man to take them into touching distance but for his intercepted pass on the breakaway.

A penalty won soon after awarded a final opportunity for the home crowd, as McElroy scored his own hat trick try from a rolling maul.

With bated breath, the Damian Bugeja Stand went into raptures with Willis’ conversion taking the haul past 100- another successful afternoon at Trailfinders Sports Club, to say the least.