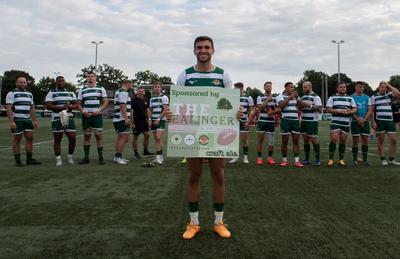 Ealing Trailfinders got off to the best possible start in the Championship opener with a 54-20 bonus-point win over Hartpury University at Trailfinders Sports Club.

Five tries in the opening 40 minutes courtesy of debutant Jan-Henning Campher, Rayn Smid, Simon Uzokwe and two penalty tries put the winning margin at 27 at the break for the home side.

With the result seemingly all but a formality, Hartpury had other ideas with their purple patch of the game arriving in the first 20 minutes of the second half, with Will Crane and Ethan Hunt adding five points each of their own.

The visitors’ strong spell initiated the impetus for Ben Ward’s men to solidify the result as Malon al-Jiboori, Angus Kernohan and Jordan Burns secured the club’s first five points of the season.

Trailfinders’ first breach into the visitors’ ‘22 came from a rapid Craig Hampson break after a pick up from the base of the scrum, but it was a near-full team effort that put the boys in Green and White in the lead a matter of minutes later.

Making his competitive debut was recent acquisition from The Lions Jan-Henning Campher, and the hooker the first to touch down after a well committed maul from the lineout as the ever-reliable Craig Willis converted.

Charlie Walker was held up after crossing the whitewash in the corner, but with his side holding an advantage, Willis again kicked for touch in an early statement of intent.

The subsequent set piece saw the home side applying unrelenting pressure towards another five points, and were close to doing just that but for former Trailfinder Oli Robinson collapsing the maul and being sent to the bin, with a penalty try awarded.

The Red and Blacks got their first points from the boot of England U20 fly-half Tommy Matthews, but it was deja vu once again with another rolling maul from a lineout being illegally interfered with, this time by Josh Gray with the inevitable penalty try to Trailfinders being given.

Despite the lopsided scoreline, perhaps the best rugby of the afternoon to that point came from John Barnes’ men after a quick tap-and-go from newly appointed co-club captain JB Bruzulier.

The scrum-half once again utilised his boot to split the Trailfinders last line of defence and Ben Foley was on the receiving end of the grubber to score, but Matthews’ extras struck the upright and away from goal.

Kyle Whyte was next in the book and sent to the bin after colliding with James Williams whilst the Hartpury man retrieved the ball in mid-air.

Brute strength from Bruzulier’s counterpart Rayn Smid secured the bonus point for Trailfinders in the first half after several phases culminating in the South African bundling through several ‘Pury players and over, giving Willis his easiest two points of the game.

Walker ran some fantastic lines for Trailfinders in the opening 40, but perhaps his most impactful action was on the defensive end to stunt a marauding Foley run into touch.

Some of the intuitive play by half-back pairing of Willis and Craig Hampson had the Vallis Way crowd purring, and it was the scrum-half who bagged his first assist of the afternoon when offloading to Simon Uzokwe for the fifth and final score of the first period.

Harry Casson became the first player in the book in the second half following a notably high penalty count in the early stages for Trailfinders, and the visitors soon capitalised with other co-club captain Will Crane dotting over from a lineout maul.

While a 20-point cushion remained intact, Trailfinders’ slightly lethargic approach was met with a renewed sense of optimism from the travelling outfit as another debutant in Ethan Hunt’s unconverted try narrowed the deficit further.

Resistance eventually prevailed with ‘Pury unable to get out of their own ‘22, Malon al-Jiboori touching down after another lineout maul with Willis again converting.

Shaun Malton’s fast-break from a ruck set in motion a counter for the home side which was once again fully operating with the wind in their sails.

Irish winger Angus Kernohan rounded off the quick move after being found in space on the right flank in the following phase, with Willis missing the follow up.

Trailfinders began to put on a show for the home faithful in the final actions as a rapid breakout from the base of the ruck was coordinated and finished off by scrum-half substitute Jordan Burns after some nifty footwork to evade the last man.