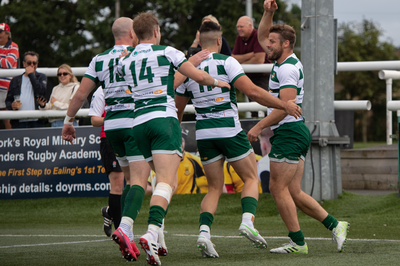 A free-scoring affair sees Trailfinders come out on top at Vallis Way.

The Green and Whites were able to overturn a narrow five-point half-time deficit after Val Rapava-Ruskin put his side in pole position at the break.

Tries from Simon Uzokwe, Malon al-Jiboori most crucially a Steven Shingler spot kick at the death ensured a confidence-boosting win ahead of the Championship campaign.

Ben Ward’s side make the trip to Kingsholm next Saturday in the reverse fixture of the pre-season billing before their first league fixture on September 18th against Hartpury.

Gloucester opened proceedings but it was Trailfinders who made an impactful start at the breakdown, winning a penalty and bullying the Cherry and White pack in the game’s first two scrums.

The hosts were able to make their presence count on the scoreboard as Max Bodilly’s risky pass made its way to new signing Cian Kelleher, but the Irishman did well to feign through the first defensive line and offload to Pat Howard to cross over.

Gloucester’s reply was nigh-on instant as full-back Kyle Moyle was found in space on the right flank to finish off an attacking move spearheaded by Billy Twelvetrees, but the latter’s missed conversion kept Ben Ward’s side in the lead.

Careless knock-ons were a feature of the half and stunted some promising play by Trailfinders in the opening 20 minutes, but David Johnston made no mistake after being on the end of a gorgeously-weighted over-the-top pass ball by Steven Shingler, adding his share of the spoils with his second conversion of the afternoon.

Recent U20 Six Nations Champion with England Freddie Thomas touched down under the post to give Twelvetrees an easy shot at bringing the deficit back to two from the tee, as the flanker showcased his robust line-breaking ability in a sequence that the boys in Green and White may look back on and could have done better.

It wouldn’t be the last time Thomas was required to put the burners on, telegraphing Shingler’s pass to intercept and breach into Trailfinders’ ‘22, but captain Rayn Smid recovered excellently as his side won the penalty in the breakdown in the following phase.

Stephen Varney looked to have gotten away with a one-handed attempt at latching onto Bodilly’s pass, with referee not deeming the play to be a bookable offence.

Val Rapava-Ruskin made sure that his side went in at the interval with the lead in their hands in the final exertion of the half from Gloucester, patiently building towards the try line before the prop bundled over.

George Skivington spoke of his intention pre-match in using as many of his 31-man matchday squad and it was all change at the break for Gloucester as a whole new 15 was fielded.

New signing Kirill Gotovstev soon made himself acquainted with Bobby de Wee as Trailfinders triumphed in the first meeting of the packs in the half.

The boys in Green and White subsequently kicked into touch and retained possession with unrelenting pressure, eventually breaking through via Simon Uzokwe with a Shingler conversion to boot.

Concerns were immediately raised for Gloucester stalwart Charlie Sharples after a heavy collison that left him unconscious for several minutes, but was met with a rapturous applause when being replaced by Jacob Morris.

Henry Walker finished off a well-executed team move from the lineout to leapfrog his team back into the lead with the sides trading blows, not before Malon al-Jiboori got on the scoresheet with Shingler missing his first kick of the match.

Trailfinders looked to extend their two point lead with just over ten minutes left and did so once again through Smid, this time via a rolling maul to leave Gloucester within a converted score of their hosts.

Gloucester’s admirable determination to persistently nudge themselves back into the conversation from every setback saw them camp out in the home side’s ‘22, but a loose lineout meant Trailfinders built some territory up the field via a box kick.

The close nature of the fixture meant it looked a certainty that the team with the final possession held the key to determine the result, such was the competitive edge on both sides' return to rugby.

Trailfinders’ fantastic work on the ground to win back two possessions left Shingler with an opportunity to all-but confirm the result with a placed kick a minute from time, with the Welshman converting to put his side 10 points ahead.

Gloucester’s typically industrious retorts meant that they had the last say, with an unconverted try to conclude a very respectable showing from both outfits.