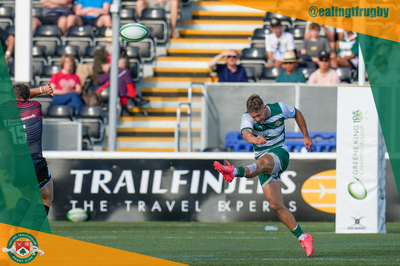 Man of the Match
David Johnston

Saracens put eight tries past fellow promotion hopefuls Ealing Trailfinders on their travels in a 60-0 win, in the first leg of the Greene King IPA Championship Playoffs.

A disappointing afternoon for Ben Ward’s team puts a significant question mark on their bid to secure Premiership status, with the second leg at StoneX Stadium still to play next Sunday.

Saracens demonstrated their international quality with dominance at the breakdown that suffocated Trailfinders throughout the 80 minutes.

12 of the men in black’s starters were indeed internationals, as tries from Maro Itoje, Aled Davies, Jamie George, Nick Tompkins, Sean Maitland, a penalty try and a brace from Billy Vunipola, condemned their hosts to a difficult defeat.

Trailfinders saw little of the ball in the opening stages, but were resilient from a powerful onslaught, consequentially resulting in Owen Farrell put the visitors up by three from the boot.

Craig Willis opted for the corner not once but twice in a galvanising response from the visitors, but it was England international Maro Itoje who silenced the Vallis Way crowd after Sarries built into the ’22 with several phases off the ruck.

Max Bodilly’s breakaway solo run from his own half and into Sarries’ was chased down and a turnover was forced, but Farrell’s following miss from the tee meant the lead stayed at 10.

Saracens’ brutish line breaking ability in midfield breached through Trailfinders’ with ease, as Owen Farrell was stopped just before the line before offloading to his half-back partner in Aled Davies to reach out over the whitewash, with Farrell converting.

Things began to turn a bit desperate for Ben Ward’s men after being unable to retain the ball with their own put-in at the scrum, as Farrell made no mistake and extended the deficit to 20.

Elliot Daly’s knock-on allowed a chance for the boys in Green and White to grab on to some much needed possession, but their counterparts had other ideas as the resulting breakdown led to Saracens snatch back the ball and kick for touch.

Hooker Jamie George peeled off the resulting rolling maul and crossed over, while England’s number 10 added to extras to conclude a dominant first forty minutes.

Saracens unrelenting pressure was sustained straight from the off with the rolling maul the method of preferred execution of play.

Billy Vunipola was the man to pick the ball and add five more points to his side’s insurmountable tally within a matter of minutes of the restart.

Not long before his substitution, Sarries flanker Michael Rhodes was lucky to escape punishment for a late tackle on captain Rayn Smid.

Substitute Luke Daniels’ efforts to force Nick Tompkins into touch after short blindside burst were soon proved to be in vein, as Billy Vunipola muscled his way over for his second of the afternoon a minute later with a Farrell conversion following.

With the scoreboard sitting at 41-0, Dean Hammond’s attempt at intercepting Elliot Daly’s tipped pass looked to be one of Trailfinders’ best opportunities to get something on the board, only for the winger to knock on with an open field ahead of him.

Guy Thompson was sent to the bin as Sarries rolled over for their sixth try of the afternoon, with Thompson going in at the side as man in the middle Wayne Barnes awarded a penalty try as a result of persistent fouls committed by the home side.

A fast breakaway initiated by Craig Willis’ punt up the park meant Trailfinders had a rare spell in the visitors’ ’22, but couldn’t make the territory nor possession count as Saracens cleared away.

Winger Sean Maitland crossed over on his opposite wing as the clock went red for the final action of the game in a sequence of fluid passing rugby, stretching Saracens winning margin to a resounding 60 points.

Ealing Trailfinders side to face Saracens:

Saracens side to play Ealing Trailfinders: