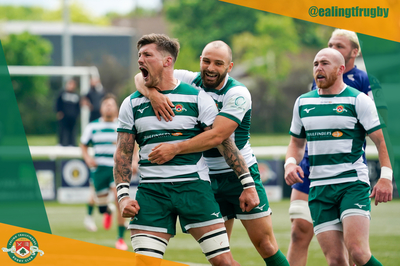 The visitors opened proceedings with ten points from Sam Olver, but the home side were able to regain control, taking the lead at the break by four points, through converted tries from Guy Thompson and Kieran Murphy.

The Knights made their hosts sweat even more with Sam Graham putting his side within touching distance of a bonus point try after the break, but a second half onslaught with tries from Dean Hammond, Michael van Vuuren, David Johnston and Luke Daniels ensured Trailfinders have a chance of Premiership rugby next campaign.

In their way will most likely be the formidable force of Saracens, a team who ended both Ealing and Doncaster’s 100% records previously and have two games to play still, with Ealing facing their upcoming bye week.

Trailfinders knew they had a game on their hands from the off as Doncaster, fresh off the back of two blank gameweeks, reaped the rewards of their early pressure with a try from Sam Olver, tumbling over from a maul and converting his own try.

The fly-half was able to then add three from the boot soon after and Trailfinders were down by 10 in as many minutes.

The boys in green and white capitalised after a disappointing kick for touch by Craig Willis and regained possession soon after, building up the pitch through several phases before Guy Thompson’s fantastic line-breaking run saw him bundle over for Ealing’s first of the afternoon, with Willis adding the extras.

A late tackle in the ruck on Jordan Burns gave Ealing the advantage, consequentially kicking for the corner and rolling over the whitewash via Kieran Murphy with Willis adding the extras once again as Trailfinders responded well to Steven Boden side’s early statement of intent.

The home side were firmly breaking into their stride as they held the lead for the first time, with Jordan Burns peeling off a ruck and into the ’22, with his pass just evading Dean Hammond and into touch when a try seemed inevitable.

After kicking their way into some territory, Doncaster’s Connor Edwards received an over the top lineout, finding space to break into the danger area.

Fantastic ground work in the ruck characterised the home side’s half, not once but twice suppressing any threat from the Knights in the final ten minutes of the half, perhaps most crucially when the game seemed to be slightly edging away from Trailfinders control.

The Knights began the second half just as they had the first, determined to lay the groundwork for the all important bonus point try they needed for play-off rugby with a game week still ahead to play for the Knights against Nottingham.

Olver’s kick for the corner typified this, instead of chipping away at the scoreline to narrow the defecit to a point, in what would have been a gimme three points.

Their decision making ended up paying dividends as Olver’s offload found it’s way to front row Will Holling, with a five metre dash over the try line.

Ealing once again had no hesitation in replying, when Max Bodilly’s quick turn off pace bypassed the back line and opened up the field, Dean Hammond tracking his run and being the eventual recipient of the former’s pass and finishing, with Willis’ extras extending the lead to six.

The home side went out with every intention to extinguish any faith Doncaster had in staying in the tie, substitute Michael van Vuuren putting five more on the board with a rolling maul from a lineout.

The Yorkshire side were handed a lifeline when they were really beginning the be put to the sword, with a knock on at the try line giving the visitors a chance to gain some territory.

The decision to clear the ball out across the field in hope of finding a breakaway runner was instead met by two of Ealing’s own, with Angus Kernohan picking the ball out of the air and handing to ball to his captain David Johnston to cross over, Willis adding the extra two from the boot.

Kyle Evans and James Mitchell’s quick feet gained some threatening ground up the pitch for the visitors, and demonstrated that maybe their side were not out of it just yet with ten minutes to go, Olver had other ideas with a loose pass as the Trailfinders regained the ball well and earned a lineout in the opposing 22 with a blistering breakaway.

Luke Daniels’ clear break for the line with some nifty footwork of his own, effectively put a conclusion to proceedings with five minutes left on the clock, with Wlllis unable to add to his tally thereafter as the Knights winless run at the Trailfinders ground continued.

Coming off seven successive bonus point wins, a victory for Saracens at Coventry this evening, their only away fixture this season, will set up the mouthwatering play-off fixture against Trailfinders, with scheduling and tickets to be confirmed.

With a place in this season's Greene King IPA Championship playoffs secure, Ben Ward's men will now enjoy a short break before returning to action in three weeks time.