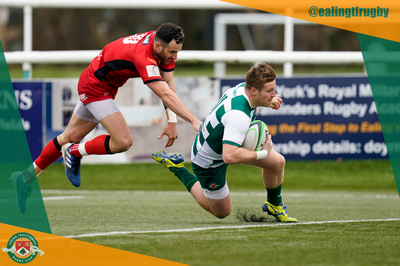 Man of the Match
Max Bodilly

Ealing Trailfinders kept up their 100% start to the season with their biggest win of the campaign so far, as they swept Hartpury aside with a 75-19 victory.

The West Londoners scored 11 tries in total as they moved back to the top of the table in sensational style at Trailfinders Sports Club.

The visitors made a strong start but failed to capitalise on a big chance in the opening minutes. Simon Uzokwe’s covering tackle ensured that the defence stayed firm, and then from the following penalty a lineout steal allowed the Trailfinders to clear.

They then switched in to gear in emphatic fashion, scoring twice in as many minutes to take control of the match within the first 10 minutes.

Hartpury had a lineout on half way and looked to swing the ball wide, but James Cordy Redden saw it coming and intercepted before racing away from 50 metres to open the scoring. Craig Willis added the extras on his 50th appearance to give his side a 7-0 lead.

Immediately from kick off the second try followed, as Craig Willis and Matt Gordon combined brilliantly in the midfield to break deep in to the 22. The ball was then recycled to Max Bodilly from the next phase, who marked his return to the starting line-up with a try. Willis again added the extras as the lead was doubled.

The visitors looked to get back in the match and had a sustained period of time deep in the 22, but once again the defence held firm and then in the blink of an eye, Ward’s men had their third try.

Alun Walker and Bobby de Wee’s smart piece of play from a lineout saw them break down the wing, and then Rayn Smid carried up to the line before offloading smartly to Kieran Murphy who bundled over from close range. Willis’ conversion took the lead up to 21-0.

Matt Gordon then looked like he had scored on his first start for the club as he picked a brilliant line from the base of a lineout to run clear and dot down in acres of space, but the referee called play back for crossing and the try was disallowed.

Hartpury then sprung in to life before the break and got themselves right back in to the match with two tries.

Joshua Bragman spotted a wide pass from Craig Willis which he intercepted and ran clear from half way to score their opening points of the match, and then Will Partlington was on the shoulder of James Williams to gather his inside pass and dive under the posts. With both tries converted, the lead was all of a sudden down to seven points.

Crucially, with just one minute left of the first half Simon Uzokwe crossed for the bonus point try to give the hosts some much needed breathing space. A penalty was kicked to the corner, and despite the maul being pulled down, the back-rower had the strength to crash over from close range to get try number four. Willis kept up his 100% record from the tee, meaning the Trailfinders went down the tunnel with a 28-14 lead at the break.

Ward’s men then made the perfect start to the second half as Dave Johnston crossed just two minutes after the restart. Uzokwe made another big carry as he went to within five metres of the line, and then it went through the hands to the Irishman who could stroll over in the corner. Another brilliant conversion meant the lead went up to 21 points.

Rayn Smid then got in on the act just five minutes later as the hosts went up a gear. A quick tap from a scrum saw them enter the 22, and then Smid was on hand to race away as he bulldozed past the last two defenders to continue his try-scoring form. Willis, who was kicking brilliantly added the conversion as the Trailfinders went past the 40 point mark.

Simon Linsell came on with 20 minutes remaining and his first action was to score against his former side. Smid carried from the base of a scrum, and then found the second-rower who powered to the line to make the perfect impact. The conversion meant the advantage grew to 35.

Jordan Burns then got his customary try from the bench with 15 minutes left as the hosts continued their relentless attacking display. Bobby de Wee, who had moved to the back-row carried deep in to the 22, and then in familiar fashion the scrum-half sniped from the base of the ruck to cross for try number eight, and also to bring up the half century.

There was still time for more try-scoring action as the Trailfinders continued to show their dominance. Shaun Malton was rewarded for a dynamic display as he bundled over for try number nine. A penalty was kicked to the corner, and the maul was never going to be stopped with the backs joining for extra power, allowing the hooker to cross. Steven Shingler, who had taken on the kicking duties was successful with the conversion.

Then straight from the restart Burns scored his second, and arguably the try of the match. Max Bodilly gathered the kick off and broke straight away as he showed impressive pace, before releasing Burns who was never going to be stopped. Shingler’s second conversion was straight through the posts.

Robbie Smith crossed for Hartpury’s third try with just a minute left as he found himself in space out wide to dive over in the corner, but then the Trailfinders scored with the last play of the game to add further gloss to the scoreboard.

The kick off went deep in to the 22 and Hartpury tried to play it wide but Max Bodilly read it and plucked the ball out of the air to score his second of the afternoon. David Johnston’s conversion signalled the end of the match, and confirmed a 75-19 victory.

Label This Man of the Match: Max Bodilly