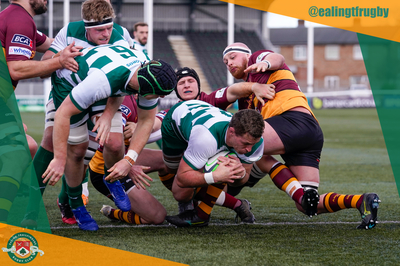 Man of the Match
Angus Kernohan

The Green and Whites scored eight tries in a performance full of intensity from start to finish as they made it two wins from two so far in the league.

The West Londoners started at incredible intensity and scored their first try with just five minutes on the clock. Kyle Whyte was adamant that he had driven over but he was held up, and from the next tap and go captain Rayn Smid bundled his way to the line from just three metres out to mark his 100th appearance with a try. Craig Willis added the conversion, putting his side 7-0 ahead.

Ampthill looked for an immediate response and kicked a penalty deep in to the Trailfinders territory, but the maul defence held firm and gave the forwards a huge boost.

The visitors grew in to the game and enjoyed plenty of possession in the opening quarter. Josh Hallett’s break in the midfield created space on the wing for Alex Humfrey but the pass was slightly behind him and the defence got back to cover.

Aleki Lutui then smashed his way to the line from the next phase, but some more outstanding defence ensured he was held up and then Willis cleared.

Craig Hampson then broke and kicked deep in to the Ampthill 22 as the hosts looked to build some momentum, which very nearly paid off. The visitors overthrew their lineout and Guy Thompson gathered, but in the act of scoring the ball went forward which meant that the chance disappeared.

The pressure paid off just before the 30 minute mark, as the Trailfinders crossed for their second try. A penalty was kicked to within 10 metres of the line, and the maul, which had half of the back-line join was too powerful as it thundered over. Shaun Malton was at the base of it to score, as the lead grew to 12-0.

James Cordy Redden then thought he had crossed for the third, but just as he had dotted down play was brought back for an earlier infringement. Luke Daniels and Angus Kernohan combined brilliantly down the wing on the counter attack, and Cordy Redden support line saw him power over, but the hosts were penalised at the breakdown from the previous phase and it was disallowed.

Russell Bennett got Ampthill on the scoreboard from a penalty in front of the posts with five minutes left of the first half, but then a sensational try from Angus Kernohan put the hosts in control of the match.

Luke Daniels gathered a high ball on half way and released the Irishman with 35 metres ahead of him, but he danced his way past the last two defenders before acrobatically finishing for a memorable try. Willis’ impressive touchline conversion put his side 19-3 ahead.

Bennett kicked another penalty with the final play of the half, as the Trailfinders went down the tunnel with a 19-6 lead at the break.

Ward’s men then started the second half in electric fashion, scoring surely one of the tries of the season just two minutes after the restart to get the bonus point.

Kernohan and David Johnston broke through from inside their own half, and released Guy Thompson who carried deep in to the 22. The ball was then spun wide to Smid who offloaded audaciously inside to Lewis Thiede who could dive over from close range to the delight of the coaches. Willis converted from the touchline as the lead grew to 26-6.

Ampthill went in search of their first try of the match as the rain came in, but the next phase then personified the Trailfinders’ work rate. A knock on allowed Daniels to smash clear, and then four players were on hand at the opposite end of the pitch to force a penalty. From the maul the Green and Whites were held up, but the intensity continued.

Fraser Strachan then went over for try number five as Ward’s side continued to impress. Willis fizzed a pass over the top to Kernohan who looked to have scored, but the pass went forward so the referee came back for a penalty. That was then quick tapped, and Strachan carried over from just inches out to take the hosts over the 30 point mark. Willis’ conversion extended the lead to 27 points as the coaches then looked to the bench.

It got even better for the Trailfinders with 10 minutes left as Jordan Burns scored a trademark try in the closing stages. James Cordy Redden’s acrobatic gather in the air set the tempo, and then from the next phase Burns was on hand to race clear from 20 metres out. Steven Shingler’s conversion brought up 40 points for the hosts.

Smid scored his second with five minutes remaining as the Trailfinders kept adding more gloss to the scoreboard. Ampthill had possession but the skipper read the play and intercepted with 30 metres ahead of him. He had to juggle the ball and showed impressive balance to stay up, but then strolled through for another score.

Will Davis then made it the perfect day with the final play of the match to bring up the half century on his 100th appearance. A scrum deep in the 22 gave them the platform, and then the loosehead powered over to seal the win. Shingler’s conversion ended proceedings, to confirm a huge 54-6 victory.

Label This Man of the Match: Angus Kernohan