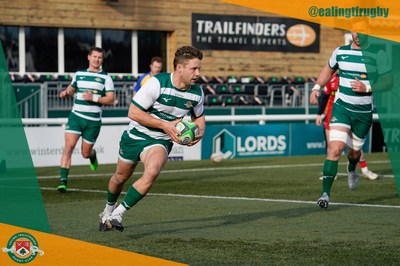 The Green and Whites scored six tries to ensure that they finished the tournament with four wins from four, and also enjoyed the trophy celebration after the match.

David Johnston, Steven Shingler and James Cannon all crossed the line, but Guy Thompson took the headlines after scoring a hat-trick in an impressive performance.

Ben Ward’s side took the lead with only seven minutes on the clock as they came flying out of the blocks with a try from David Johnston. Jack Tovey, who was back in the starting line-up for the first time in 12 months made a break in the midfield and then from the following phase the ball was spun straight to the Irishman who could stroll over from close range. Steven Shingler added the first of five conversions on an excellent day from the tee.

Former Trailfinder Sam Olver hit straight back for the Knights as they got off the mark with a penalty, but it was the hosts who would continue to dominate the early proceedings and the second try came just before the 20 minute mark.

A penalty was kicked to the corner, and then from the formidable rolling maul Guy Thompson was at the base to score his first of the match. Shingler’s conversion gave his side a 14-3 lead.

Doncaster then enjoyed plenty of possession for the remainder of the half and got their rewards after half an hour as they got their first try of the match.

A succession of penalties saw Will Davis sent to the sin-bin, and then from a five metre lineout George Roberts drove over. Olver’s conversion cut their deficit to just four points.

Both sides had counter attack opportunities in the closing stages of the first half, but neither were able to capitalise, meaning the Trailfinders went down the tunnel at the break with a 14-10 lead.

The hosts made the perfect start to the second half and took the game away from the Knights in the third quarter.

An early penalty was hammered in to the visitors’ 22, and with the maul rumbling towards the line all the backs got involved which made it impossible to stop, and Shingler was able to break away to dive gratefully over the line. He converted his own try which saw the lead grow to 21-10.

Bobby de Wee then became the second Trailfinder to get a yellow card as he was penalised for a deliberate knock on, and as a result Olver kicked another penalty as the Knights looked to chip away at the lead.

The result was put beyond doubt just before the hour mark as Thompson went over for the bonus-point try. Angus Kernohan went within inches of the line but was unable to stretch for the whitewash, however Thompson was next to gather the ball and took full advantage. Another Shingler conversion in the strong wind took the advantage up to 15 points.

James Cannon was next to get in on the act with 10 minutes remaining for try number five. Craig Hampson went on a trademark snipe at the base of the ruck and went close to scoring himself, but then the second-rower stretched over to score a deserved try as the scoreline got some gloss added to it.

A long stoppage then brought the game to a halt, but it sparked in to life in the closing stages with both teams scoring late tries.

Kyle Evans raced clear for the Knights from long range to dive under the posts, but Guy Thompson then completed his hat-trick with the final play of the match from the base of a maul to conclude another very promising day for the men in Green and White.

Shingler’s conversion ended the game and confirmed a 40-20 victory, which was followed by a well deserved trophy lift after a memorable Trailfinders Challenge Cup.