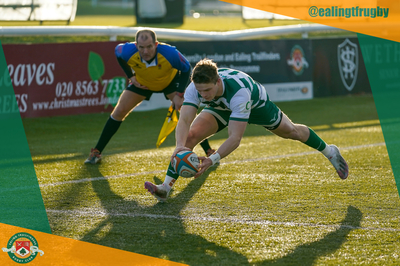 Ealing Trailfinders made an incredible start to the Trailfinders Challenge Cup with a memorable 27-26 victory over Saracens in Round One.

The Green and Whites relied on a phenomenal second half, with Alun Walker scoring twice in a man-of-the-match performance to secure the win.

Craig Willis gave the Trailfinders the perfect start, with a penalty after just two minutes to give his side an early advantage, however almost immediately that was cancelled out as Will Hooley dissected the posts to make it 3-3 in the early stages.

The West Londoners were enjoying plenty of possession and took a deserved lead with 10 minutes gone. Craig Hampson dummied from the base of a lineout and went within five metres of the line, so the ball was spun wide immediately and Angus Kernohan was there to dive over in the corner, once again highlighting his impressive start at his new club. Willis added the conversion from the touchline as the Trailfinders went 10-3 ahead.

Hooley then cut the lead to just a point with two penalties in quick succession before Willis punched his side four ahead with another penalty, but the visitors then took the lead ahead of half time with a try from Elliott Obatoyinbo.

The three-time European Champions had sustained pressure in the 22, and then the flying full-back found space which enabled him to step to the line.

That gave Saracens a 14-13 advantage, but the Trailfinders refused to lie down as half time approached and came close to scoring twice.

Pat Howard was held up over the line after smashing his way through the defence, and then Dean Hammond had a one on one in the corner but in the process of offloading the ball trickled in to touch, so it was the visitors that had a one point lead at the break.

Ben Ward’s men started the second half with great intensity and dominated territory as they looked to regain control of the match.

A string of penalties resulted in a five metre lineout on 55 minutes, and that proved to be the turning point as Alun Walker went powering over from close range to mark his return to the side with a try. Willis’ conversion again from the touchline sailed through the posts to put the hosts 20-14 ahead.

Saracens however came back strongly and went close to scoring, only to knock on in the process of placing the ball over the line which gave the Green and Whites a huge sigh of relief.

They did get over the line at their next opportunity, as Kapeli Pifeleti drove over from a maul, but crucially the conversion went narrowly wide so the Trailfinders still held a one point lead.

The result was then put beyond doubt with just five minutes left, as a period of numerous penalties in the 22 meant that Saracens were reduced to 14 with a yellow card, and Ward’s side capitalised with their third try.

A five metre lineout meant that once again it was Alun Walker who found himself at the back of the maul to cap a fantastic individual performance with a brace, and spark celebrations from the squad. Willis’ conversion importantly meant that the lead was beyond a converted try.

Saracens scored with the final play of the match as Tom Woolstencroft was the beneficiary of a break from Tom Whiteley to secure a losing bonus-point for them, but the day belonged to Ealing Trailfinders who marked their return to competitive rugby with a hugely significant win.

Round Two of the Trailfinders Challenge Cup sees Doncaster Knights host Saracens next Saturday, before the Trailfinders make the trip to Castle Park on Saturday 30th January for their next assignment.