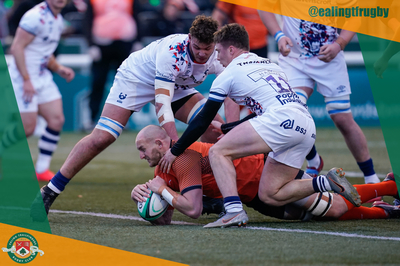 Ealing Trailfinders secured their third victory of the pre-season campaign with a 35-19 win over Bristol Bears ‘A’ at Trailfinders Sports Club.

On a day that will be remembered for the return of supporters who were back for the first time since the start of the COVID-19 pandemic, the West Londoners scored five tries as Harry Seward, Harry Casson, Kieran Murphy, Jordan Burns and Simon Uzokwe all crossed the try-line.

Ben Ward’s side got off to the perfect start with a try inside the first three minutes. A penalty was kicked deep in to the 22, and then they went through the phases until Harry Seward drove over from close range. Steven Shingler added the conversion to give the hosts a 7-0 lead.

Bristol then grew in to the game and fly-half Tom Wilstead kicked three penalties as they edged their way 9-7 in front after the first quarter.

Harry Casson then scored instantly to reinstate the advantage for the home side. A lineout gave them the perfect platform, and a big carry from Fraser Strachan took them up to the line before Casson powered over the line. Shingler’s conversion put the Trailfinders 14-9 ahead.

Levi Davis and Luke Daniels then combined down the wing as the Green and Whites threatened to pull away in the closing stages of the first half, but scramble defence from the Bears saw the opportunity disappear.

Kieran Murphy put the Trailfinders in control of the match just before half time with their third try of the opening 40 minutes. Two consecutive penalties from a driving maul took them to within 10 metres, and then a quick tap allowed the Welshman who would go on to win the Man of the Match Award to stretch and place the ball on the line. Shingler’s third conversion sent his side down the tunnel with a 21-9 lead.

The second half became disjointed due to the large amount of replacements for both sides, but the Trailfinders did extend their lead on the hour mark with an exceptional try from Jordan Burns.

Rayn Smid made a break down the wing as he stepped past a number of defenders, and drew in the final man to release the scrum-half who raced clear from 35 metres out. Craig Willis added the extras from in front of the posts, and took the lead up to 19 points.

Bristol got back in to the match with a rolling maul try from George Kloska with 15 minutes remaining, but Simon Uzokwe then crossed to add some gloss to the scoreboard.

A flowing backs move with some great hands throughout allowed them to enter the 22, and Uzokwe then spotted a gap from the breakdown and scored his first try for the club. Willis’ conversion reinstated the 21 point lead.

Bristol then scored with the final play of the match as Josh Pieterse got on the end of a rolling maul to cross, but the day belonged to the Trailfinders who made it three wins out of four in the pre-season matches.