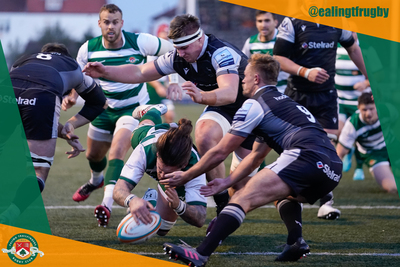 Ealing Trailfinders made an emphatic return to rugby with a highly impressive 38-17 victory against Newcastle Falcons at Trailfinders Sports Club.

Ben Ward’s side scored 30 points in a relentless second half display after trailing by two points at the break, ensuring that they recorded a four-try win against their Premiership opponents.

Angus Kernohan, Kieran Murphy and Guy Thompson all crossed the line, as well as a penalty try after a huge effort from the forwards en route to the victory.

After a 253 day wait for a match, it was the Falcons that started strongly and enjoyed most of the possession in the opening quarter. They entered the Trailfinders 22 on a number of occasions but were met by a resolute defence, however the pressure paid off on the 25 minute mark.

A penalty was kicked deep in to the 22 and they built their way towards the line phase by phase, with former Trailfinder Mark Tampin driving over the line to give his side the lead. Joel Hodgson’s conversion gave the visitors a 7-0 lead.

The hosts responded immediately however to get their first try of the afternoon. Craig Willis’ kick put the Falcons under pressure and they were dragged in to touch, giving the Trailfinders a lineout just five metres from the line.

From the resulting maul, the ball was spun to Willis who grubbered in behind, and it bounced up perfectly for Angus Kernohan to mark his debut with a try. The conversion went wide, but the deficit was now just two points.

Hodgson and Willis then exchanged a penalty each just before the break, meaning the Falcons had a 10-8 lead at half time.

What was to follow was a scintillating 40 minutes from the Trailfinders, who took their performance to another level in the second half.

Willis kicked the hosts in front with a penalty after Guy Thompson’s break saw the Falcons penalised, with the flags raised by the officials to signal an 11-10 lead.

Kieran Murphy then put the Green and Whites in the ascendancy with a try five minutes later. A huge touch-finder put them within scoring distance, and there was no stopping he back-rower from just a metre out as he bundled over the last defender. The conversion meant the lead was now up eight points.

Gary Graham was then sent to the sin-bin for repeated infringement, and it wouldn’t take long for the Trailfinders to take advantage as they continued to apply the pressure. Craig Hampson was held up over the, but from the next phase a penalty try was awarded and a second yellow card in as many minutes, this time for Logovi’ Mulipola.

The maul was powering over and left the officials with no choice, and all of a sudden the West Londoners had a 25-10 advantage.

Willis then kicked his this penalty of the day to further assert the dominance, before Guy Thompson put the result beyond doubt with a debut try.

A penalty was awarded and some quick thinking from the back-rower saw him take it quickly before the defence was set, and there was to be no stopping him from close range. The conversion sailed through the posts to the delight of the Green and Whites.

Newcastle then scored with 10 minutes remaining as Sam Stuart touched down from another quick penalty, but Man of the Match Willis would have the final say as another penalty dissected the posts, confirming a memorable win for the Trailfinders.